The Christian now has to live in a society which is very different from the society of Bible times, but human nature is, as ever, fallen and lost.   We will look briefly at some of the classifications of present day life and how they affect the Christian.

Western nations are said to be in a Post Christian era, but what does this mean?     These nations were never "Christian nations " since  Christian faith is a matter for the individual.  Perhaps the  term "Post Christian"  says most about the attitude of those who use it.     But perhaps it is a fair description of the state of the church in our nations.

David Pawson provided a brief view of the state of Christianity in the United Kingdom which is rather sobering.   In the introduction to his teaching on "Islam's challenge to Christianity", he looked at some "isms" which have influenced the times we live in.

Does this make the world a little clearer ?

We are led to assume that Democracy is an essential product of our "Christian" Western civilization.   Why should this be true?

In practice it seems that democracy is better than the available alternatives ( Winston Churchill said,  " Indeed it has been said that democracy is the worst form of Government except all those other forms that have been tried from time to time.") but it actually means government by appeal to the preferences of the majority.   We see the results in the decay of moral standards in the West as legislation follows the desires of the vocal forces of immorality and greed.   The golden age after the Return of Messiah Jesus will not be a democracy but the reign of a just and righteous king.

Tolerance is a very positive word, and a very "British" characteristic, but is it commendable or desirable? We should not be critical but should be accepting, multi-cultural and multi-faith we are told. The Bible does indeed teach that we should love others and Jesus is the best possible example in his compassion for us lost sinners. But Jesus did not accept sin, rebellion and error and call it good.  Christianity and Judaism (also Islam) teach us that there is only one God and that he will not accept us giving allegiance to another. The Bible sets out the moral code by which we should live and allows for no do-it-yourself moral codes. The Christian should follow the example of Jesus and be more than just tolerant of the individual but should not be tolerant of sin and error.

Relative Morality  is a characteristic of our society today.   It is old fashioned to accept a higher authority laying down absolute standards.   Man has always justified himself by making comparisons with those worse than himself.    He does not compare himself with God’s standard.

We should not be expecting to be nice and tolerant to everybody and have them like us; not if we wish to follow Jesus.   The writer to the Hebrew Christians pointed out in chapter thirteen,

The high priest carries the blood of animals into the Most Holy Place as a sin offering, but the bodies are burned outside the camp.  And so Jesus also suffered outside the city gate to make the people holy through his own blood.   Let us, then, go to him outside the camp, bearing the disgrace he bore.   For here we do not have an enduring city, but we are looking for the city that is to come."

Political Correctness has become a humanistic constraint which forbids the holding of absolute values, which some people find challenging to their chosen lifestyle.   P.C. may (arguably) have been commendable in overcoming racial intolerance but it has been hijacked.     Do not be seduced into assuming that it is a "Christian" value.

Post Modernism  is a term used to categorize of the way society functions in the period after  the "Modern" Art and Architecture period typified  by the works of Henry Moore and Piet Mondrian.

This is what we live in today – you may recognize it.

The best illustration of this is an advertisement break on TV.   Enormous technical expertise is put into the generation of glossy entertainment, which is a substitute for life in the real world.   Even News and Current Affairs programmes now use the same techniques.

By inference, Post Modern life is selfish and has no room for commitment, long-term objectives, facing unpleasant realities and the pursuit of things that will be costly but that will last.   In contrast, Jesus said in Matthew 6 v19-21 ,

"Do not store up for yourselves treasures on earth, where moth and rust destroy, and where thieves break in and steal.   But store up for yourselves treasures in heaven, where moth and rust do not destroy, and where thieves do not break in and steal.   For where your treasure is, there your heart will be also."

The Emergent Church is Post Modern and very difficult to pin down, but this in-depth analysis by Phil Johnson, Executive Director of Grace to You should be really helpful in alerting people to the dangers. gracechurch.org

New Age ideas flow smoothly from relative morality and draw together an eclectic mixture of old pagan beliefs from all around the world, with a modern pseudo-scientific spin.   There is a spectrum of belief and practice from watered down Christianity right through the occult to Wicca, Witchcraft, and Satanism.   An Internet search on "wicca"  will find sites ranging from traditional herbal remedies and FAQ pages explaining how Wicca is a benign belief system in tune with the Earth, practiced by all sorts of ordinary people - through to sinister witchcraft and black magic (magick) sites.  (these sites can be accessed in spite of screening software).   Witchcraft is the darker end of the whole "green" eco-friendly modern awareness of the earth movement, as well as the feminist movement.  (Much occult belief is about feminine deities)

"Let no one be found among you who sacrifices his son or daughter in the fire, who practices divination or sorcery, interprets omens, engages in witchcraft, or casts spells, or who is a medium or spiritist or who consults the dead.   Anyone who does these things is detestable to the LORD,      (Deuteronomy 18 v10-12)

Israel, in these End Times, is full of New Age Religion, mediums and occult practice.

As the prophecy of Zechariah draws to its climax we read, in Ch13 v2-6   "On that day, I will banish the names of the idols from the land, and they will be remembered no more," declares the LORD Almighty. "I will remove both the prophets and the spirit of impurity from the land.   And if anyone still prophesies, his father and mother, to whom he was born, will say to him, `You must die, because you have told lies in the LORD's name.' When he prophesies, his own parents will stab him.   "On that day every prophet will be ashamed of his prophetic vision. He will not put on a prophet's garment of hair in order to deceive.   He will say, `I am not a prophet. I am a farmer; the land has been my livelihood since my youth.'    If someone asks him, `What are these wounds on your body?' he will answer, `The wounds I was given at the house of my friend.   Baron* explains how this refers to the prophets / ministers of pagan cults and their practices  (self inflicted wounds of idol worshippers - Deut 14 v1 - 1 Kings 18 v28), and how those involved will finally be dealt with.              * see Books

The New Age is presented as very tolerant of any faith.   In fact this tolerance becomes the rejection of any exclusive faith  ( Christianity and Judaism and Islam, which say there is only one way to salvation through only one god).    The long term aim of the New Age movement is the replacement  of all other religions with one "world-state religion".    Search for " Rainbow Swastika."

The Green and Ecology movements are supported by many concerned people, but it also has many adherents who lean towards "Mother Earth" worship and paganism.  "Green"  thinking can undermine sound Christian  life if allowed to go beyond concepts of common sense, good stewardship and challenges to rampant consumerism.

Have you noticed the desire for so called "spiritual" lifestyles, divorced from faith in God but part of a "chilled out" lifestyle of gentle music, candles, soft colours, fung shui and all that sort of stuff?

Even people who are not religiously inclined tend to take an interest in the possibility of seeing future events.  The prophecies of Nostradamus are mentioned every so often and are supposed to have predicted major world events.   See the article on https://www.gotquestions.org, that puts Nostradamus in a proper perspective. 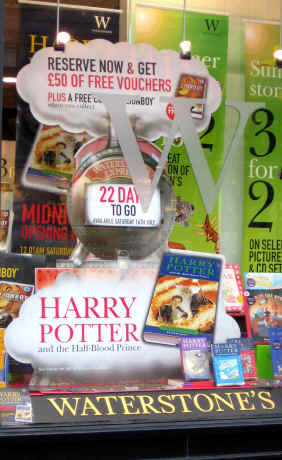 Use the Internet and search on Harry Potter and you will find, in addition to the official Harry Potter sites and fan sites, sites advancing opposing sides of a fierce  controversy.

There is a strong body of opinion saying that opposition is narrow-minded, book-burning intolerance and that the books are merely in the traditions of children's fantasy writing and are very well written tales of good versus evil.   The websites carrying these views are pro-tolerance societies.

There is another body of opinion which acknowledges that J K Rowling is a master of her craft but urges us to make a careful evaluation of what the books actually convey and what effect they have on their enthusiastic readers.    A good introduction to this side was given by www.crossroad.to .   This page argued that we all, and particularly children, absorb values through subtle suggestions hidden in entertainment if it is well presented.

If this were not true why are so many millions spent on advertising using sophisticated imagery to sell us things?   And why are Spin Doctors so important in politics today?

Nobody disputes the amount of witchcraft and occult material in the Harry Potter stories, even if the spells are not authentic.   One noticeable difference from the witches in traditional children's tales is that some  witches are good guys and not just bad guys.   Crossroad.to points out five suggestions implicit in Harry Potter, in addition to the obvious danger of getting children fascinated by the occult.

It should also be noted that the good and evil, right and wrong are very relative in Harry Potter's world;  he is rewarded for rebelling and lying when it produces a positive outcome.

The Harry Potter phenomenon is very much a product of our present society but God is just as concerned as he ever was that we avoid occult suggestions;

(In the USA it is forbidden to teach religion in public schools - including Christianity - but  Wicca and the occult gets a good exposure through the reading of Harry Potter stories.   Those who question this practice are labelled as hysterical book-burners like those of the Dark Ages who burned women they did not like as witches.   In the USA, Wicca is not just the interest of a few eccentrics but a recognised religion with tax exempt status and chaplains in the armed services.)

The Christian should be aware that he is living in a war zone just as much as, or more than the Bible saints.  Only the dead and the prisoners of war are not involved.

Perhaps the appeal of Harry Potter and other fantasy literature is the promise of Spiritual Powers and signs and wonders.     Perhaps we in the Church have largely forgotten that we should be  living and fighting in the Spiritual Power of the Holy Spirit and we concentrated too much on adopting Post Modernist methods to appeal to contemporary society.

For an overview of the spiritual beings and the spirit realm, click on Angels