"Who endowed the heart with wisdom or gave understanding to the mind?" Job 38:36 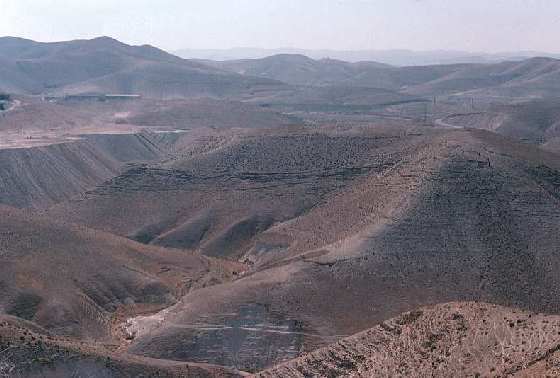 The desert of Judea, looking towards Jerusalem - Farthest horizon is the Mount of Olives

Concerns a means of deliverance from some evil by payment of a price.  Prisoners of war might be released on payment of a ransom.  Slaves could also be released by a ransom or he may pay his master a price.   In the context of what Jesus has done for us, he has paid the price to deliver us from spiritual death (Romans 6 v26, "For the wages of sin is death, but the gift of God is eternal life in Christ Jesus our Lord.") or to release us from slavery to sin.  In either case the ransom was his own death - the sinless one dying for the sinners.

To Justify means to acquit or to declare righteous (not guilty) in the sense used in a court of law.  In the case of the Christian it means that God, the judge, has found it possible to declare him not guilty.  Some people explain the new status of the Christian as "JUST as IF I'D never sinned".  Clearly God is a fair judge and can only justify us sinners on the grounds that the penalty for our sin has been paid in full  (by the death of Jesus).   (Galatians 2 v16,  So we, too, have put our faith in Christ Jesus that we may be justified by faith in Christ and not by observing the law, ....)

In Romans 5 v1, where the NIV talks of being "justified by faith" the CJB talks of being, "considered righteous by God because of our trust".

Being right before God - living right.   Most religions are about aiming to live right, and many are concerned with a judgment day on which one's righteousness will be determined by weighing one's good deeds against one's bad deeds in the scales of judgment.  If the good outweigh the bad, rewards will follow.   Although many believe this is the principle of Christianity, this is not so.   Christianity is unique in calling for 100% righteousness - no falling short of perfection.  (God is perfect and will not want anything that is not perfect in His presence (Heaven).)    Thus the pursuit of righteousness is impossible and is also self defeating as it leads to Self Righteousness and pride.    The unique thing about faith in Jesus / Yeshua is that He provides us with the righteousness we lack.   Through His sacrifice, His righteousness is imputed to us (counted to our credit) and imparted to us (given to us to make us better - until, when we get to heaven, we will be perfect like Him.)   To be a Christian one must not only repent of sin, but also of our own righteousness.

Sanctify comes from the Latin and means to make holy.   The Hebrew root  (quds) is in terms of being set apart as opposed to being for common use.  For the Christian, Sanctification is the ongoing process of life changing which, subject to his willingness, is undertaken by the Holy Spirit.  Thus he or she will be changed in moral outlook and thought with consequent change in behaviour.  See Galatians 5 v22,  But the fruit of the Spirit is love, joy, peace, patience, kindness, goodness, faithfulness, gentleness and self-control.

It should be remembered that salvation is an ongoing process.  As the CJB translates Romans 1 v16,  "For I am not ashamed of the Good News, since it is God's powerful means of bringing salvation to everyone who keeps on trusting,  . . . . "  (This can be discerned from the continuous tense of the Greek)

Is the removal of wrath by the offering of a gift.  In the Old Testament it is in the sense of Atonement.  Although the modern mind tends to find that this definition sounds unjust, this word was not used to suggest that God could be bribed to overlook sin.  God will never overlook sin, but he is willing to forgive those who acknowledge their sin and seek his forgiveness.  He provided a sacrifice (death of an animal in place of the sinner) as a means for the sinner to make the transaction of seeking and obtaining forgiveness and pardon.  This sacrificial victim role was ultimately fulfilled by Jesus.

1) It comes from the Anglo-Saxon and means "making at one".   It is a process of bringing together those who are estranged.

2) In addition to reconciliation it means making reparation  by giving the equivalent of an injury done, or by suffering to give the wronged party satisfaction for the wrong or injury.

Firstfruits of Zion point out that the word our English translations render as “atonement” is the Hebrew kaphar. The word kaphar has different shades of meaning.

1) It implies a protective covering. When the Torah describes how Noah applied pitch to the exterior of his ark, it uses the term kaphar. In the ritual context of Israel’s worship system, the worshippers, the priesthood and even the Tabernacle and its furnishings all require kaphar in the sense of ‘covering.’ They all need to be covered in order to stand in the presence of God.

2) It can also be rendered as ‘ransom’ for one’s life. In the Torah, kaphar can mean a monetary payment made in exchange for a blood-debt.

The Jewish Day of Atonement  ( Yom Kippur ) was the day when the high priest offered sacrifices for his sin and the sin of the people to make atonement - to bring the people back into a union with God which had been spoiled by a year of falling short of his standard.   ( see The Feast of Trumpets and The Day of Atonement )

OK, so Forgiveness is not such a big word - but it is a very big deal. We all need forgiveness from God and we all need to be able to forgive othere; and even ourselves. What does forgiveness really mean and how can we get it and give it? Essential preaching by R T Kendall.

The root of these words is missing the mark or deviating from the goal.  In Judges 20 v16 it says,  "Among all these soldiers there were seven hundred chosen men who were left-handed, each of whom could sling a stone at a hair and not miss".  The "not miss", would be more literally translated from the Hebrew as "not sin".   Of course, the major use in the Bible concerns the way we  miss the standard of life that God requires of us.  We fail to live according to his law;  both the written law and the promptings of our conscience.

The event that occurred three days after Jesus' death on the cross is referred as his resurrection; his coming back to life.  Paul referred to Jesus' resurrection as the first fruits of them that sleep (have died).  There had been miraculous returns to life in the Old Testament and in Jesus' ministry, but these people would have died at the end of their normal lifetime.  The resurrection is the rising again to eternal life  (and judgment for those who reject God's salvation).

Gentile is the English equivalent of the Hebrew Goy (singular) or Goyim (plural).   A Goy is literally a nation, but actually, is normally used to mean a person from the nations (a non Jew).   (God promised to make Avraham a goy).    The difficulty comes with the implications attached to the word - -  The Nations surrounding Israel in Bible times were all heathen, pagan nations;  therefore Gentile was synonymous with heathen.  This meaning is still attached, and while we might be happy to be known as "Gentile" (not Jewish),  Jewish people are embarrassed to call us Gentiles because it sounds insulting.

The Hebrew word "Ger" has various shades of meaning, including the resident alien, a proselyte to Judaism, a non Jewish God fearer. Perhaps we, having been grafted in to God's olive tree of Israel, could regard ourselves as gerim (?).

This is used by Christians as a general purpose praise word.  Actually it is  the Hebrew word hoshia na which means "save please".    Understanding this gives much more meaning to the Palm Sunday story.  (Matthew 21 v9)  See also Tabernacles

(For materialism, hedonism, secularism, rationalism, romanticism, relativism, pluralism and syncretism  -  and the effect they have on faith, please see Living in the Post Christian era )

(please contact us if you have other troublesome big words.  See Beginners page)

Some Hebrew words and idioms Yeshua used do not come out in our English Bibles, but are very revealing.

Davar means both  "a word"  and  "a deed".    This is very revealing about the Jewish faith.    With God there is no difference between saying the word and doing the deed.   Think of Creation.

Chesed is not a big word, but its significance is huge. It translates variously as "grace" and "lovingkindness" and other things, but it expresses every aspect of God's covenant love towards us. Lance Lambert explored chesed when expounded on Psalm 118 at the 2006 ICEJ Feast of Tabernacles. (recording available on CD) He pointed out that the recent translation of the Brit Hadashah (New Testament) back into Hebrew uses the word chesed in "by chesed are you saved".