"I will be an enemy to your enemies and will oppose those who oppose you." Exodus 23:22

The Blogs Defend Israel against the Media

The interesting thing about the Lebanon war was the way that, while the media (Fox News excepted) ran with the terrible stories produced to damn Israel, an army of bloggers was dissecting the news stories and finding the flaws which revealed how the world media was being manipulated.

The Ambulance story - examined by Zombietime

On the night of July 23, 2006, an Israeli aircraft intentionally fired missiles at and struck two Lebanese Red Cross ambulances performing rescue operations, causing huge explosions that injured everyone inside the vehicles.   Or so says the global media, including Time magazine, the BBC, the New York Times, the Los Angeles Times and thousands of other outlets around the world.   If true, the incident would have been an egregious and indefensible violation of the Geneva Convention, and would constitute a war crime committed by the state of Israel.
But there's one problem: It never happened.

The evidence showed that the alleged rocked hit was actually where a ventilator had been torn off but the vehicle could not have been hit by a missile. 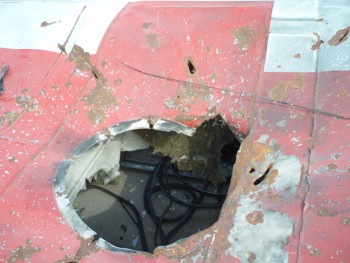 The interior of the ambulance

the subject of a real missile strike 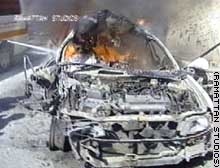 Apart from the suspect timing of the reported collapse being eight hours after the Israeli attack, The work of EU Referendum exposed evidence that the filming of child casualties being removed from the rubble was all a staged and highly distasteful hoax, possibly even using dead children from elsewhere. 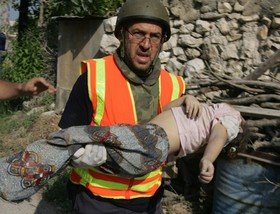 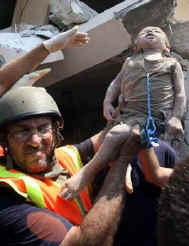 The man who became known as "Green Helmet"

He appears throughout the footage analysed by EU Referendum, and appears to be a professional carrier of dead children and stage manager of photo-ops

PowerLine analysed the alleged missile attack on a Reuters Land Rover.  As in the ambulance story, the damage shown was not consistent with a missile strike  (concrete block perhaps?)   This story also produced the victim with a blood soaked shirt and pristine undershirt. 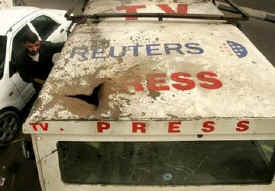 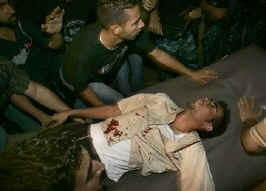 The "casualty" with blood soaked shirt.

Little Green Footballs first drew attention to the various photo doctoring frauds, like the photograph of Beirut in which smoke had been enhanced to make the scene look much worse. 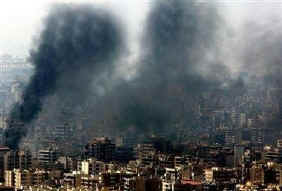 The Photoshop cloning tool has been used to enhance the smoke in this picture, as pointed out by L.G.F. and Honest Reporting (in their excellent Quiz)

The pattern in the smoke is totally unnatural and a clear sign of fraud.

The photographer guilty of this and other frauds was dismissed. 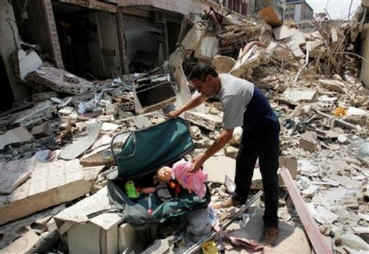 There were also the pictures children's toys in the rubble to produce emotive images for use against Israel.

Here is the first in the sequence, evidence of how the pictures were posed .  This man selects a Barbie doll from  his suitcase full of children's toys, pulls the arms off and poses her.

Look for the clean toys in the middle of the dust. 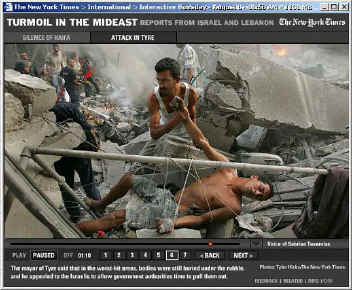 This "dead" man  (dust free) also features in other pictures as a rescuer, wearing the green cap which he has tucked under his arm for this pose.

The fraud becomes obvious when the whole set of pictures are collected together. 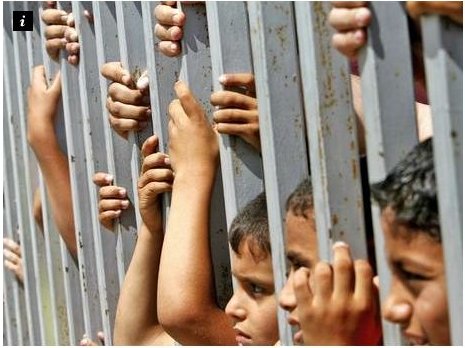