From the Jewish side - Dabru Emet 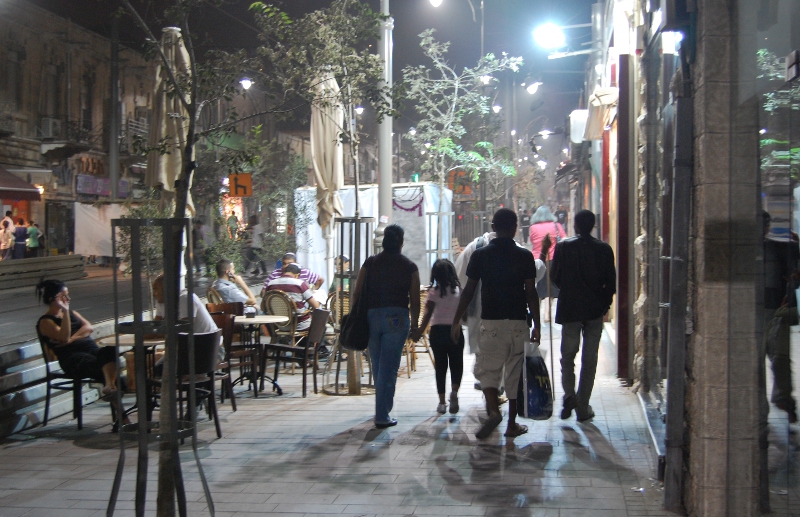 Most of this website is concerned with what God is doing to the wall of hostility from the Christian side, as this is the side we live on.  However, G-d is at work on the Jewish side too.

Although Pope John Paul did not speak for the whole Christian Church, he showed himself to be a man who loves the Jews.   His year 2000 visit to Israel and his expressions of repentance for the sins of the Church against Israel made a deep impression.   It appears that G-d has used this and other expressions of love from Christians to prompt a re-evaluation of the relationship from Jewish spiritual leaders.

A statement  has recently been drawn up by four Jewish scholars in the United States, and  has received the support of nearly 170 Jewish leaders from around the world.

Before the rise of Christianity, Jews were the only worshippers of the God of Israel. But Christians also worship the God of Abraham, Isaac, and Jacob; creator of heaven and earth. While Christian worship is not a viable religious choice for Jews, as Jewish theologians we rejoice that, through Christianity, hundreds of millions of people have entered into relationship with the God of Israel.

Turning to it for religious orientation, spiritual enrichment, and communal education, we each take away similar lessons: God created and sustains the universe; God established a covenant with the people Israel, God's revealed word guides Israel to a life of righteousness; and God will ultimately redeem Israel and the whole world. Yet, Jews and Christians interpret the Bible differently on many points. Such differences must always be respected.

3.  Christians can respect the claim of the Jewish people on the land of Israel

The most important event for the Jews since the Holocaust has been the re-establishment of a Jewish state in the Promised Land.   As members of a biblically based religion,  Christians appreciate that Israel was promised – and given – to Jews as the physical center of the covenant between them and God.   Many Christians support the State of Israel for reasons far more profound than mere politics.  As Jews, we applaud this support.  We also recognize that Jewish tradition mandates justice for all non-Jews who reside in a Jewish state.

4. Jews and Christians accept the moral principles of Torah.

Central to the moral principles of Torah is the inalienable sanctity and dignity of every human being. All of us were created in the image of God. This shared moral emphasis can be the basis of an improved relationship between our two communities.   It can also be the basis of a powerful witness to all humanity for improving the lives of our fellow human beings and for standing against immoralities and idolatries that harm and degrade us. Such witness is especially needed after the unprecedented horrors of - the past century.

5. Nazism was not a Christian phenomenon.

Without the long history of Christian anti-Judaism and Christian violence against Jews, Nazi ideology could not have taken hold nor could it have been carried out. Too many Christians participated in, or were sympathetic to, Nazi atrocities against Jews. Other Christians did not protest sufficiently against these atrocities. But Nazism itself was not an inevitable outcome of Christianity. If the Nazi extermination of the Jews had been fully successful, it would have turned its murderous rage more directly to Christians.   We recognise with gratitude those Christians who risked or sacrificed their lives to save Jews during the Nazi regime.  With that in mind, we encourage the continuation of recent efforts in Christian theology to repudiate unequivocally contempt of Judaism and the Jewish people. We applaud those Christians who reject this teaching of contempt, and we do not blame them for the sins committed by their ancestors.

6. The humanly irreconcilable difference between Jews and Christians will not be settled until God redeems the entire world as promised in scripture.

Christians know and serve God through Jesus Christ and the Christian tradition. Jews know and serve God through Torah and the Jewish tradition. That difference will not be settled by one community insisting that it has interpreted scripture more accurately than the other, nor by exercising political power over the other. Jews can respect Christians’ faithfulness to their revelation just as we expect Christians to respect our faithfulness to our revelation. Neither Jew nor Christian should be pressed into affirming the teaching of the other community.

7. A new relationship between Jews and Christians will not weaken Jewish practice.

An improved relationship will not accelerate the cultural and religious assimilation that Jews rightly fear. It will not change traditional Jewish forms of worship, nor increase intermarriage between Jews and non-Jews, nor persuade more Jews to convert to Christianity, nor create a false blending of Judaism and Christianity. We respect Christianity as a faith that originated within Judaism and that still has significant contacts with it. We do not see it as an extension of Judaism. Only if we cherish our own traditions can we pursue this relationship with integrity.

8. Jews and Christians must work together for justice and peace.

Jews and Christians, each in their own way, recognize the unredeemed state of the world as reflected in the persistence of persecution, poverty, and human degradation and misery. Although justice and peace are finally God's, our joint efforts, together with those of other faith communities will help bring the kingdom of God for which we hope and long. Separately and together we must work to bring justice and peace to our world. In this enterprise we are guided by the vision of the prophets of Israel.

It shall come to pass in the end of days that the mountain of the Lord’s house shall be established at the top of the mountains and be exalted above the hills, and the nations shall flow unto it . . . and many peoples shall go and say, ‘Come ye and let us so go to the mountain of the Lord, to the house of the God of Jacob and he will teach us of his ways and we will walk in his paths.’ (Isaiah 2 v2-3)

This response, by Shlomo Kalo, was forwarded to wildolive from Israel  by a Jewish visitor.

To the authors of "Speak the Truth"

Your initiative deserves the highest praise. My hope is that our people, the Jewish people will accept it and affirm it. From my point of view it is desirable that we too, the Jews together with those Christians who have expressed remorse, shunned anti-Semitic prayers and rescinded the commandment to hate the Jews - will respond appropriately and make a gesture worthy of the name.
In my humble opinion we should do all that is in our power to uproot from our hearts the hatred that has lasted for generations, excise shameful passages from the Talmud and call the Christian savior "Yeshua" rather than "Yeshu" which is a crude version of the name based on an acrostic.

Wishing you success
And with God blessing.