"then the LORD your God will restore your fortune and have compassion on you and gather you again from all the nations where he scattered you." Deuteronomy 30:3 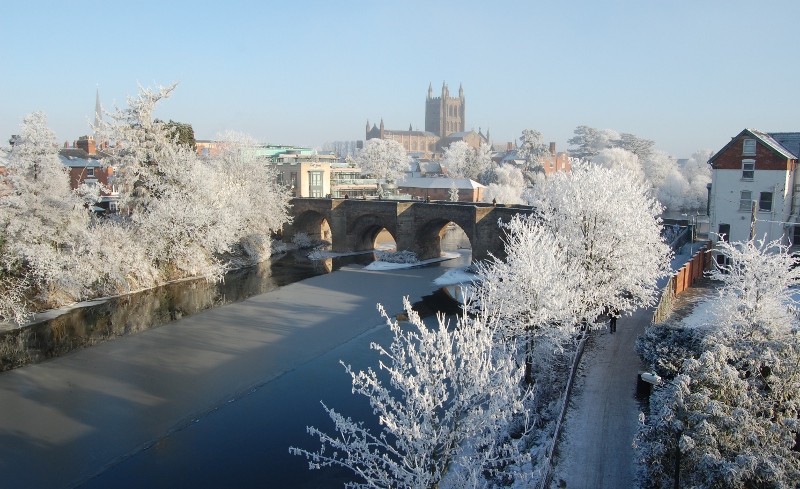 Hereford, England - home of a Jewish community before 1290

This history  is taken mainly from the work of Joe Hillaby,  from "The Jews of Britain" by Pamela Fletcher-Jones, from "The Anguish of the Jews" by E H Flannery (See Books) and the BBC Radio 4 series, "Jewish Journey" .

During the reigns of Henry III and Edward I, the clerks of the Exchequer of the Jews at Westminster produced a mass of records, in which the lives and tribulations of the Jewries can be traced in detail which is surprising for the time.

Although a few Jews came from Roman times onwards, the majority came to England, from Rouen in France, with William the Conqueror in 1066. The first English "Street of the Jews" was recorded in London in 1128 and by 1229, 17 towns had a Jewry.

Until the time of Stephen (1135-54) the Jews had prospered. He sought to protect them but he also sought to tax them - up to one fourth of their liquid assets.

At the coronation of Richard the Lion Hearted in 1189, Jews bearing handsome gifts were refused entry by officials and pelted by mobs. The story circulated that the king wished them exterminated and many Jews were killed in riots and their stately homes were burned. Richard punished the ringleaders and sought to prevent further outrages and protect his financial interest in "his Jews".   When Richard left for the third crusade in 1190 a series of terrible massacres wiped out several Jewish communities. The York riot was the worst. Before following Richard to the crusades, warriors, many of whom were heavily in debt to the Jews, plundered the possessions of the Jews. The Jews fled to the castle and were besieged by the warriors. When the Jews realised they were doomed they took their own lives. The few surviving when the tower was stormed were slaughtered. The attackers then went to the cathedral and burned the records of their financial obligations to their victims.

King John (1167- 1216) imprisoned all Jews, tortured many and extorted 60,000 silver marks. In 1194 English Jewry was called to Northampton to allocate a Tallage of 5000 marks – their contribution to ransom of Richard I. Also in 1194 "The Exchequer of the Jews" was set up to control money lending activities.  Every Jewish moneylender had to swear an oath on the Torah scrolls that he would register all his bonds.  The church forbade money lending for interest so the Jews were needed as they did not have such a prohibition.  Although many Jews became wealthy through money-lending, their legal status was one of rightlessness".   "The Jew can have nothing of his own, for whatever he acquires, he acquires not for himself but for the king".   In 1210 John arrested all wealthy Jews and demanded a ransom for their release.   Roger of Wendover recorded the story of one "Jew of Bristol" who refused to pay his ransom.   The king ordered his torturers to pull out one of his molar teeth every day until he paid the 1000 marks.   He stood it for seven days, but paid the ransom when they started on his eighth tooth.

In 1218 the Council "informed what great profit might arise from the Jews if they are kindly dealt with". Prominent people were responsible for their security from molestation, "especially from the Crusaders".   In March 1218 the Royal Council, under pressure from Papal legate ordered that all adult Jews wear the cloth "badge of shame". It was a yellow felt or taffeta shape representing the two tablets of the Law, 2 fingers wide by 4 long.  In 1275 it was increased to 6x3. These were troubled times as the church was becoming increasingly Anti-Semitic and Crusaders were questioning going off to the "Holy Land" to kill infidels when they had Jews at home to deal with first.   Jews were suspect because they were not under the rigid control the church exercised over the natives, and because they were conspicuously different and separate in dress, lifestyle, customs, language, and education (locals were illiterate and innumerate). Their business was a source of resentment to those who owed them money.

When Edward was crowned in 1272 the Jews were too poor to be needed and in 1275 his "Act concerning Jews" prohibited them from money lending.

In 1290, Edward I sent secret orders to the sheriff that all Jews, with their wives, children and chattels, were, on pain of death, to quit the realm by 1 November, the feast of All Saints. The sheriff was to ensure that they suffered no injury, harm, damage or grievance in their departure. The penalty for any Jew who remained behind after that was death. In October (a month before the deadline) 16,000 had left for France and Belgium. Many did not arrive – (some were tricked by a ships captain, into leaving the ship when it ran aground in the Thames Estuary.   They were then left to drown with the rising tide.)

Paris was the goal of the wealthiest, but in February 1291 Philip the Fair expelled all English Jews from his lands except those profitable to the French crown .   It is not known what became of Hereford's Jews.

Major acts against the Jews of England, and the corresponding, recent acts of repentance.

AND THE REPENTANCE OF CHRISTIANS IN OUR DAY

1189    LONDON - Coronation of Richard Lionheart (September 3rd) - No Jews or women admitted to Westminster Hall - Several Jews beaten or trampled to death - Riots: 30 dead including the Rabbi Jacob of Orleans