as I recite my verses for the king; my tongue is the pen of a skillful writer. Psalm 45:1 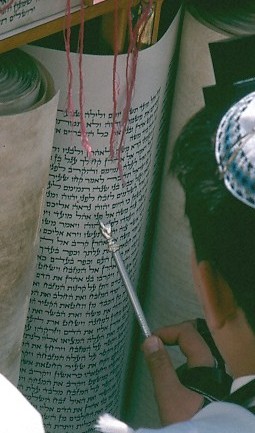 Who would have believed that a language thought by some to have been dead for nearly 2000 years would live again and be the national language of the reborn Promised Land; Eretz Israel?

Who has ever heard of such a thing? Who has ever seen such things?   Can a country be born in a day or a nation be brought forth in a moment?   Yet no sooner is Zion in labor than she gives birth to her children. (Isaiah 66 v8)

But why is the Hebrew language of interest to the Christian and why are some of us so hooked on it?

I am sure our friend Amnon is right when he says, "Reading the Torah in a translation is like kissing your bride through a handkerchief."   Once you have listened to a Bible teacher who loves Hebrew you become aware that so much richness of meaning is contained in the Hebrew words and constructions that several translations might be possible for a word or phrase but none will convey its fullness.

Also, many who have heard Hebrew feel that there can be no better language in which to praise Eloheinu than in the language He used to communicate to His people.   Even God’s names are so rich and full of praise.

So what is Hebrew?

Hebrew is an ancient language that is written from right to left with a set of letters which does not include vowels. The first two letters are Alef and Bet, so the letters are an Alefbet. The Jewish/Hebrew scriptures were written without vowels, and the teachers and priests passed on the pronunciations verbally. It works in the same way that "Speedwriting" in English worked, by omitting the vowels – try it.

In Israel today, the language written and spoken is also Hebrew, but the modern version is written without pointing and the spoken language differs in pronunciation of some letters.  Not all Jews were happy about the use of Hebrew as an everyday language as they feel it is God’s language for worship and teaching. Thus some orthodox communities use Yiddish for everyday conversation and Hebrew for worship and Torah study.

Certain letters are modified when they occur at the end of a word.

The Masoretes, in around 700CE devised a system of dots which were placed under the letters which were followed by a vowel sound.   This system is comprised "pointing" to give the vowel sounds and "cantillation" to indicate emphasis etc.   This fixed the texts to the accepted pronunciation of that time.    This is the form in which you will encounter the Tanakh.

Put simply, the vowel sounds are as follows.

Two dots, one above the other, signifies an ultra short sound that is effectively a very short break.  This is called a schwar.  In transliterations it is written as an apostrophe.   eg   l'yisrael  ,  meaning "of Israel" or "for Israel".

The vast majority of words in the Hebrew language can be boiled down to a three-consonant root word that contains the essence of the word's meaning. Even if you cannot read Hebrew, you will find that you can get some insight into the meaning of the Bible by identifying the roots of words. Read more at JUDAISM 101

Concepts in Hebrew language and thought

Hebrew differs from Greek in some interesting ways.  For instance, there is no separate word or concept for heart and mind, sacred and ordinary.  Thus the language reflects the way of thinking;  the Greek pattern we have inherited separates heart from mind and sacred and ordinary while Hebrew thought does not

So all of life is to be enjoyed for God, without conflict between heart and head.

The author is not a qualified Hebrew reader, speaker or writer; merely an enthusiastic beginner.   However, the following may be of assistance to others who wish to try Hebrew.

The author attended a series of eight evening classes, that aimed to teach enough basic understanding for the student to read the words, look them up in a dictionary and painstakingly read and understand the text.   Look out for courses near you.    See also Jot and Tittle, below, for Kesher courses.

If you can obtain a Siddur (Jewish prayer book) you will find lots of scripture portions and prayers in Hebrew and the local language.   This can help you learn or practice. 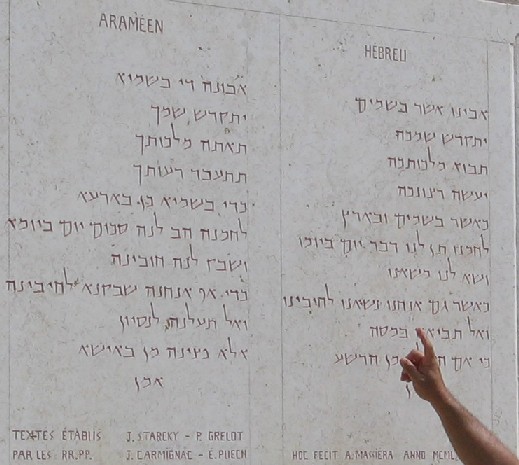 Notice the similarity or family resemblance between Hebrew and Aramaic. There is a body of opinion that Jesus spoke Aramaic, not Hebrew. The way this idea comes out in the New International Version of the Bible suggests that the translators had an anti-Jewish, anti-Hebrew agenda stemming from the church's history of cutting off its Jewish roots.

There is no reason to argue that Jesus did not speak Aramaic, since he grew up in cosmopolitan Galilee. He probably knew Greek too. But, remembering that he taught the Jewish people from the Hebrew scriptures, it is ridiculous to infer that Jesus was not a Hebrew speaker.

In this six minute audio extract, courtesy of Nehemia Gordon, he explains that the Hebrew language was alive and well long after the first century. Even more interesting is the proof that Hebrew was the original language, before God confused the languages at Bavel / Babylon. Click here

This extract is from "Pearls from the Torah" episode 2. More here http://nehemiaswall.com/

There are web sites, software packages and books which may enable the student to teach himself / herself.

You will find www.biblicalhebrew.com  will be very interesting.

Hebrew for Christians gives wonderful insights into the language itself and the truths conveyed by it.  It is a site for learning Hebrew or for getting a taste of the language.  Other features include Jewish humour and Yiddish.

On the  Shalom Peace website there is ministry and aids to learning Hebrew, including downloadable flash cards for the Alefbet.                www.shalom-peace.com

Makor Hebrew Foundation aims to empower Jews and Christians to grow spiritually in their understanding of Scripture through the exploration and examination of the Hebrew sources of their respective faiths.

The E-Sword software is a free Bible utility that includes concordance, Strong's dictionary and other facilities along with the ability to display the text in various translations, including the original Hebrew and Greek. Some translations (KJV) are free whilst others may be purchased. www.e-sword.net

The HTML Bible web site offers an interlinear Old Testament with both modern Hebrew and early Hebrew plus transliterations.

On the Karaite web site, you will be able to download a Tanakh in pointed Hebrew and a Siddur (in pdf format)

The Tanakh is available as an HTML document which opens in your browser, but if you have the SIL fonts installed you can copy the text into word and use the SIL Ezra font which is like the script used in the Tanakh scrolls.      www.karaite-korner.org

"Do not think that I have come to abolish the Law or the Prophets; I have not come to abolish them but to fulfill them. I tell you the truth, until heaven and earth disappear, not the smallest letter, not the least stroke of a pen, will by any means disappear from the Law until everything is accomplished. (Matthew 5 v117-18)

The KJV used the expression "jot or tittle" but the reference is actually to the letter Yod (the smallest letter) and to a the smallest detail of a letter.

Torah Educational Software, Inc. have produced software called Word by Word, that puts the Hebrew Bible text on your screen in a clear font and reads it slowly and clearly, highlighting each word as it goes. It offers three dialects and a player bar that allows you to pause and backtrack. Word By Word Jonah is free to download as a sample to try.: 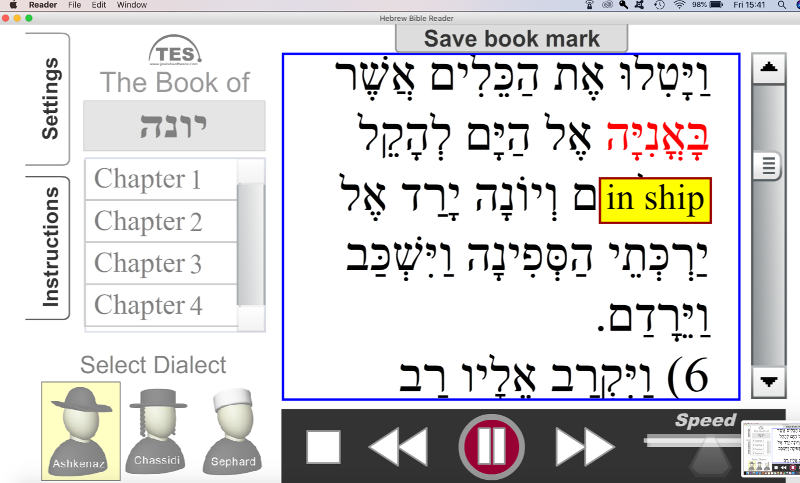 Screenshot from Mac version of Jonah Word by Word

You are welcome to visit their website for more Word By Word Bible Study.

https://www.jewishsoftware.com/word-by-word.html
The Bar Ilan University Responsa Project and other Judaic Libraries are all distributed by TES.
All products include Free Tech Support

Learning to speak modern Hebrew can be undertaken in various ways but the author has been advised that the best way is by living in Israel for a while, and possibly doing an Ulpan course. Many Israelis had to learn the language that way after making aliyah.

Hebrew on line - learn Modern Hebrew or Biblical Hebrew - apparently no longer available under this name.

For a professional language course, face to face with on-line tutors in Israel, sign up with Classical Hebrew.com or Hebrew Online.com .

Another way of learning Hebrew

By telephone or Skype with a personal tutor.

I studied with Hebrew Online, but I have no personal experience of this service

It is possible to pick up Hebrew worship, learning the phrases and words, by joining with Messianic groups or gatherings such as the ICEJ Feast of Tabernacles.

You could even learn some of the blessings (Brachot) which are included on this web site.    (The process would be a little second-hand, but the sound clips can be played repeatedly with just a mouse click.     It might work for you.)        Audio File

If you want to be able to type and print Hebrew, you can do it on your PC. Windows and Word can be enhanced to allow the use of Hebrew fonts, a Hebrew keyboard layout and right to left typing. See foot of page for some experiences.

For Mac users with OS10, it is very straightforward as everything you need is already to hand. There is a pair of YouTube tutorials here. https://www.youtube.com/watch?v=CyxdeU89Nhw

At http://jwit.webinstituteforteachers.org/hebrew%20in%20Windows.pdf you can get the instructions for setting up various versions of Windows.

Yiou should be able to find guidance on typing Hebrew, including the niqud ( points) on your setup and a guide to the Hebrew keyboard layout. See right

A system that has been around for a while is the software made available through SIL. By downloading and installing Hebrew fonts, a Keyboard modifying programme and a Hebrew keyboard module it is possible to make Microsoft Word type Hebrew. The process requires quite a bit of perseverance, but the results are effective and the utilities are freeware if they are for home/student use.

The Hebrew text on wildolive was produced utilities from SIL (Summer Institute of Linguistics).

Microsoft Windows includes some Hebrew fonts and others may be downloaded from the Internet. See www.wazu.jp/gallery/Fonts_Hebrew

The author has not mastered reading, speaking or typing Hebrew, but remains fascinated and enthusiastic.