Accompanied by trumpets, cymbals and other instruments, they raised their voices in praise to the LORD. 2 Chronicals 5:13

Musical Instruments of the Bible 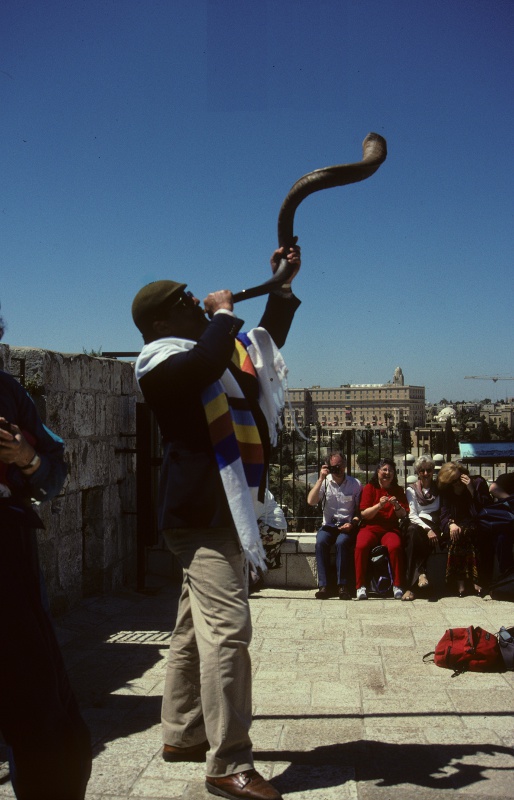 Blowing the Shofar in Jerusalem

Musical instruments were an important part of worship in Bible times and their use has spiritual significance.

The Shofar    (Ramshorn Trumpet) and the Silver Trumpet

The shofar was (is) blown in different ways for different purposes.

The Shofar is usually made from a rams horn, but longer spiral instruments  are made from ibex horns.

The shofar is the world's oldest wind instrument and an instrument of spiritual warfare.
It is often translated in the Bible as trumpet.

The word yovel  is translated as "Jubilee" in Leviticus 25, but as "Shofar", or trumpet, in Joshua 6.   The shofar is the sound of freedom or release from bondage!

The Encyclopedia Judaica says,  "The rams-horn calls upon sinners to repent, awakens thoughts of God's sovereignty, Justice and redeeming power, expresses the Jew's hope that God will before long sound the great shofar to herald deliverance and the ingathering of the exiles to the land of Israel."

Had you thought of using this mighty sound as a weapon in your spiritual warfare ?  You can click on the buttons below to hear the different sounds.   The sound files are .mp3 files and should play in your media player.

You may wish to save the audio files, and place one on your desktop for use at any time.  Or you could use as your Windows start-up sound.  We suggest you do this by right clicking on the button and left clicking on "Save Link as" (Firefox) or "Save target as" (Internet Explorer)

If you can't save a file, contact us by E-mail so we can E-mail one to you.

These sounds come from a tape of the ministry of Richard Booker.  He covers the Shofar in more detail in his book.  See Internet .

Need some advice on blowing your shofar ? 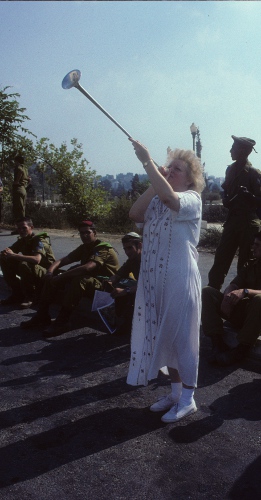 "Make two trumpets of hammered silver, and use them for calling the community together and for having the camps set out. When both are sounded, the whole community is to assemble before you at the entrance to the Tent of Meeting. If only one is sounded, the leaders--the heads of the clans of Israel--are to assemble before you. When a trumpet blast is sounded, the tribes camping on the east are to set out. At the sounding of a second blast, the camps on the south are to set out. The blast will be the signal for setting out. To gather the assembly, blow the trumpets, but not with the same signal. "The sons of Aaron, the priests, are to blow the trumpets. This is to be a lasting ordinance for you and the generations to come. When you go into battle in your own land against an enemy who is oppressing you, sound a blast on the trumpets. Then you will be remembered by the LORD your God and rescued from your enemies."

In this picture, a member of our party is blowing the silver trumpet near Jaffa Gate, Jerusalem, on the march of Christian friends of Israel during the I.C.E.J. Feast of Tabernacles in October 2001. 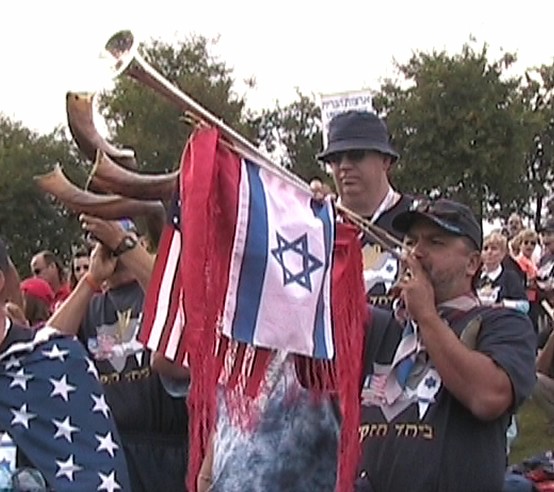 The Silver trumpet makes a sound like the more familiar brass trumpet with valves.

In this clip, recorded at the Feast of Tabernacles Jerusalem March in October 2005, the silver trumpet can be heard along with a Shofar and one man blowing two shofarot at the same time.

It is well known that David played the harp and used it while he composed many of the psalms.  He was called to play to Saul to comfort him when his spirit was troubled.

The harp  ( nevel  in Hebrew )  had a part in worship, prophecy and healing.

The lyre  ( Kinnor  in Hebrew ) is smaller and a more portable, personal instrument.

The biblical harp was not heard in Israel for 2000 years, but has recently returned.  Micah and Shoshanna Harrari made aliyah to Israel taking their harp making trade with them.  When they researched harps, they discovered that the ten stringed harp of King David was considered a symbol of Israel.  (Psalm 144 v9). 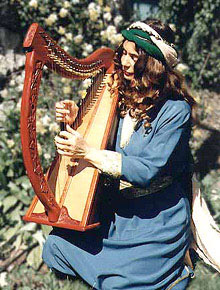 They tell how a rabbi heard one of these instruments tuned to the ancient Hebrew mode and exclaimed that it was a fulfilment of prophecy.  The Talmud said that when the harp was sounded again in Jerusalem, Messiah would come.

More detail of both types of harp and recordings can be found on their website.

Visit the website www.harrariharps.com for more information, details about purchasing your own harp, CDs of their harps and more.  Click on the pictures.