What is so special about Jerusalem  ( Yerushalyim) ?

In Genesis 14 v18 there is reference to the King of Salem, Melchizedek, who is a priest of The Most High, who blessed Abraham.  In Genesis 22 v2 Abraham was prepared to sacrifice Isaac in the land of Moriah, which is believed to be the site of the Temple.

When Israel entered the Promised Land the city (Jebus) was occupied by the Jebusites.  Joshua and the people defeated the Jebusites but were not able to capture the city.   David captured the city  (2 Samuel 5 v6) and made it the capital of his kingdom.  The city was on Mount Zion, which is outside the present day walls of the old city.   Solomon extended the city and built the Temple on Mount Moriah  (1 Kings 6).   God was pleased to have his Glory dwell with his people in the Temple in Jerusalem, and his Shekeinah filled the Temple.   (1 Kings 8)

The history of Jerusalem, looking both backwards and forwards, is linked with the Temple.  (see The Temple )    Revelation 21 talks of a new Heaven and a new Earth and a new Jerusalem ...  "now the dwelling of God is with men".   Jerusalem is all about God's desire to dwell with men, which will one day be fulfilled.

Jerusalem from wildolive on Vimeo.

What is the significance of the names given to this city ?

The meaning and origin of the name are obscured in history, but the name of Jerusalem (Yerushalayim) is essential to every Jew.   Jerusalem is often said to mean "City of Peace".

It is remembered three times a day in the prayers of a Jew.   Synagogues are built facing towards Jerusalem as it is the centre of Jewish faith.

It is remembered at weddings, the glass crushed under the groom's foot recalling the destruction of the Temple.

The Passover seder ends with the wish "next year in Jerusalem".

The Israeli national anthem is called Hatikvah,  (the hope).   That hope concerns Jerusalem.

The three feast seasons in the Jewish religious calendar were pilgrimage feasts.   (See  Feasts of the Lord and New Testament references to attendance of feasts in Jerusalem).   Some of the Psalms are "Songs of Ascents", since one always talks of going up to Jerusalem.  They were sung by the pilgrims approaching Jerusalem.  The best known is Psalm 118, which includes "Baruch haba bashem Adonai " (blessed is he who comes in the name of the Lord.)  (v26)   This was traditionally sung to pilgrims coming for Passover, but was taken up with special significance as Yeshua (Jesus) entered the city.    (John 12)   (remember Yeshua means "God is Salvation", or "God's salvation")

In Hebrew, the city is known as ir haq-quades  (City of Holiness) because it is synonymous with the Temple/Sanctuary.  In Arabic it is called al-quads  (the sanctuary)

Interestingly, the medieval map of the world (the Mappa Mundi) in Hereford, England places Jerusalem in the centre)

The name of the mount where David's city stood became synonymous with Jerusalem and the names tend to be used interchangeably in scripture.  "Mount Zion, where you dwelt";  ( Psalm 74 )   "His tent is in Salem, his dwelling place in Zion".   ( Psalm 76.)

Zion provided the focus for aspirations of Jews seeking a homeland after the Holocaust, giving the movement the name "Zionist".  Thus Zion indicates the city, the Promised Land and the Children of Israel,  even while they are in exile.

The city is also referred to as Ariel, which means Hearth of God  (a name for the altar of burnt offering.   (see Ezekiel 43 v15-16 and Isaiah 29 v1-2 & 7)  It tends to be a cryptic name for Jerusalem, the principle stronghold of God's people and centre of worship.

He went up to Jerusalem for Passover when he was twelve  (his Bar Mitzvah) and stayed in the Temple discussing Torah with the teachers.  ( Luke 2 v41)   He remarked to his anxious parents, "Didn't you know I had to be in my Father's house?."

Jesus was resolute about going to Jerusalem,

"...for surely no prophet can die outside Jerusalem!   O Jerusalem, Jerusalem, you who kill the prophets and stone those sent to you, how often I have longed to gather your children together as a hen gathers her chicks under her wings, but you were not willing!  Look, your house is left to you desolate.  I tell you, you will not see me again until you say, "Blessed is he who comes in the name of the Lord".   (Luke 13 v33-34).   ( "baruch haba b'shem adonai"  Psalm 118 v26 )

As he approached Jerusalem and saw the city he wept over it and said,

Jesus told what was to happen in his Olivet Discourse, recorded in Luke 21 v5-36,

Jesus knowingly entered the city as the Passover lambs were brought into the homes to be examined, and died as they were being slaughtered.   He knew his sacrificial death had to take place in Jerusalem; the place of God' dealings with mankind.   ( see  Passover )

What is Jerusalem's place in prophecy and events yet to unfold ?

It is absolutely central.  ( see  End Times Prophecies , Babylon and  The Temple  )

The future of Jerusalem is in the hands of the God of Israel, not the present World leaders and politicians.   The word of the Lord concerning Israel  (Zechariah 12) says, 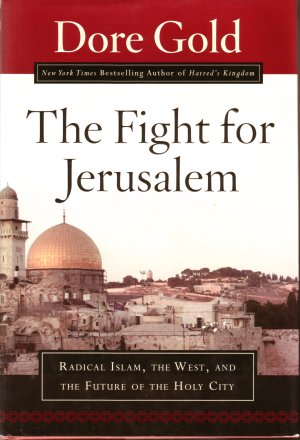 If one looks to the heart of the conflict in the "Middle East" it becomes apparent that the fighting is ultimately over who owns Jerusalem.

Many of the same arguments and tactics are used as in the battle over the Land but the issues are more intense and more focussed. An understanding of the history of the Fight for Jerusalem may be gained by reading the thorough treatment of the subject by Dore Gold.

Gold argues that if Jerusalem is to be a free city where all faiths can be practiced, it will have to remain under Israeli sovereignty, because the United nations is untrustworthy and the increasingly radical Muslim Palestinians are looking to obliterate other faiths from Jerusalem, not tolerate them.

In order to understand where we are now, we must understand what has happened in the past and how these events have formed the positions taken by protagonists today and the claims they are making. This book will provide you with that understanding.

Jerusalem will be the seat of Messiah's Millennium Kingdom.

Jerusalem is said to be the Holy Place for three religions.  (the third most holy place for Muslims)  Yet, Jerusalem  is mentioned 1022 times in the Bible but not once in the Koran !  To whom is it most important, who loves it most and who does God want to govern it ?

Having said all the above, the fact remains that the present Jerusalem is only the earthly Jerusalem.

The writer to the Hebrew believers reminded us in chapter 12 ,   "But you have come to Mount Zion, to the heavenly Jerusalem. We must not forget that the New Testament speaks of the Heavenly Jerusalem, as our home.