" But seek first his kingdom and his righteousness, and all these things will be given to you as well." Matthew 6 v33 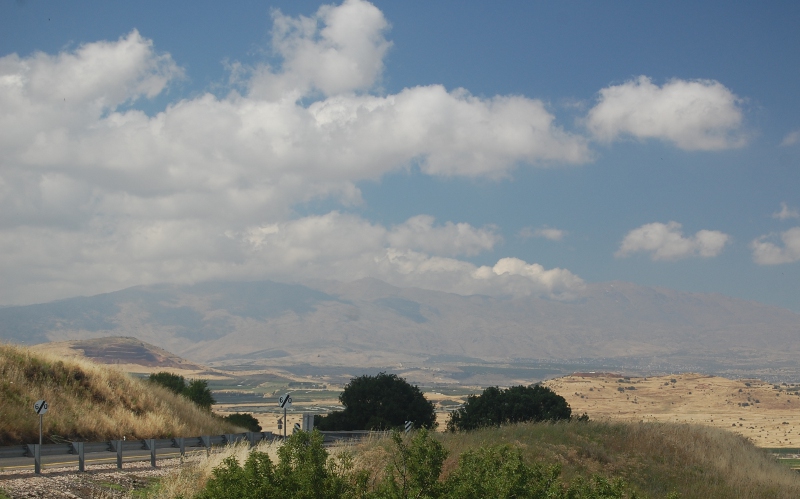 Mount Hermon, Northern Israel - the probable site of the Transfiguration of Jesus

What does "the Kingdom" mean?

The Kingdom of God (Kingdom of Heaven) is the highest priority subject for the follower of Yeshua / Jesus; Why?

Jesus told us to “Seek first his kingdom” Matthew 6:33.

Mark does not use this phrase, but says in the same situation Jesus preached that people should repent (6:12) and talked of preaching the good news to all creation, and Luke 24:47 speak of repentance and forgiveness of sins to be preached in Jesus' name to all nations; or Mark 16:15 – to all creation.

“The kingdom of Heaven” is a typical Jewish way of expressing something whilst avoiding the use of the name of God, so it is interchangeable with “the kingdom of God.”

What the Kingdom is - and is not

Jesus said, "My kingdom is not of this world. If it were, my servants would fight to prevent my arrest by the Jews. But now my kingdom is from another place."

And the teachers of the law who came down from Jerusalem said, "He is possessed by Beelzebub! By the prince of demons he is driving out demons." So Jesus called them and spoke to them in parables: "How can Satan drive out Satan? If a kingdom is divided against itself, that kingdom cannot stand.

John records Jesus saying no-one can enter the kingdom unless as a child. (John 3:5)

What the Apostles preached is variously described as “repent and turn to God” (Acts 3:19), proclaimed the Messiah (Philip in Acts 8:5) carry Jesus' name before the Gentiles (Acts 9:15)

Another overlap is with Jesus' commission to his followers, to make disciples, (Hebrew – talmidim meaning to bring people into a state of following and learning to obey the kingship of Jesus (the real meaning of the kingdom)

From these overlapping descriptions of the Kingdom we can deduce some things about Jesus' Kingdom message. For people to come into this kingdom (and leave Satan's kingdom) they have to....

Hear about Jesus the Messiah (having, in many cases, been healed in his name)

Accept who Jesus is and scripture's diagnosis of their condition, in childlike trust.

Repent of sin (do teshuvah – turn around) and be forgiven.

Start to trust in Jesus' righteousness and not their own and allow themselves to be remade by the Holy Spirit / Ruach ha Kodesh. Romans 14:17

The kingdom of God is not eating and drinking, but righteousness, shalom (peace and wholeness) and joy in the Ruach ha Kodesh –

They must start walking as talmidim / students / learners / disciples of Jesus; including preaching the kingdom and healing the sick.

Jesus spoke of the Kingdom being near, meaning near in space, not in time. It is at hand now and can be reached out and grasped.

Dwight Prior pointed out that John the Baptist had some difficulty with the package of the Kingdom and sent his disciples to check that Jesus was the one he had been announcing. In his teaching on Jesus' and John's view of the kingdom, Dwight Prior looked at how John looked at the prophecies of the coming Messiah, including both his first and second coming – preaching good news and healing and also coming in judgement and vengeance. He pointed out how Jesus, in setting out his mission, actually did a "cut and paste" on Isaiah 61 and 58 in the synagogue in Nazareth (He stopped short of vengeance in chapter 61 and added “the year of the Lord's favour” from chapter 58) Judgment and Vengeance were for later - for his second coming.

What was the kingdom Jesus preached and taught us to pray about (the Lord's Prayer)?

We all know “Thy Kingdom come” - (addressed to our Father in Heaven; it must be remembered) but do we understand what Jesus meant when he taught us to pray this? It helps to think of God's kingship coming into our lives; our accepting him as king of our lives.

A Prayer to Our Father

The Hebrew original of this prayer (found in the Hebrew Gospel of Matthew) gives a different perspective, as explained by Keith Johnson in the book “a Prayer to Our Father” that he co-wrote with Nehemiah Gordon. They showed how this prayer is a good Jewish prayer taught by a rabbi to his students. The third line translates as “May your kingdom be blessed.” (page 115)

This helps clarify that we are not praying that God will regain the kingdom he lost to Satan. God is not shut out of his own kingdom, like David had been, and longing to be regain his kingdom from usurpers. Satan is not sitting on God's throne, even though he has his own throne in this world. The Hebrew version of the Avienu Prayer confirms that we are not praying for a future restoration of God's kingdom but about God's existing and present kingdom.

So what is meant by blessing God's kingdom / kingship? The root of the word translated blessed is Berekh and this refers to the knee – meaning that as we pray this we are bowing in adoration of God, our king as well as our father

(Avinu Malkaenu is the Jewish expression meaning "Our Father, our King")

The seventh angel sounded his shofar; and there were loud voices in Heaven, saying, “The kingdom of the world has become the Kingdom of our Lord and his Messiah, and he will rule forever and ever!”

(notice that the first kingdom has a lower case “k” while the second has a capital “K”.

Then the end will come, when he hands over the kingdom to God the Father after he has destroyed all dominion, authority and power.

Kingdom Now theology proposes that the church will bring the world to perfection and rule it ready to hand it over to Jesus - There is no evidence of progress towards this goal.