"When he lies, he speaks his native language, for he is a liar and the father of lies. Yet because I tell the truth, you do not believe me!" Jesus - John 8 v44 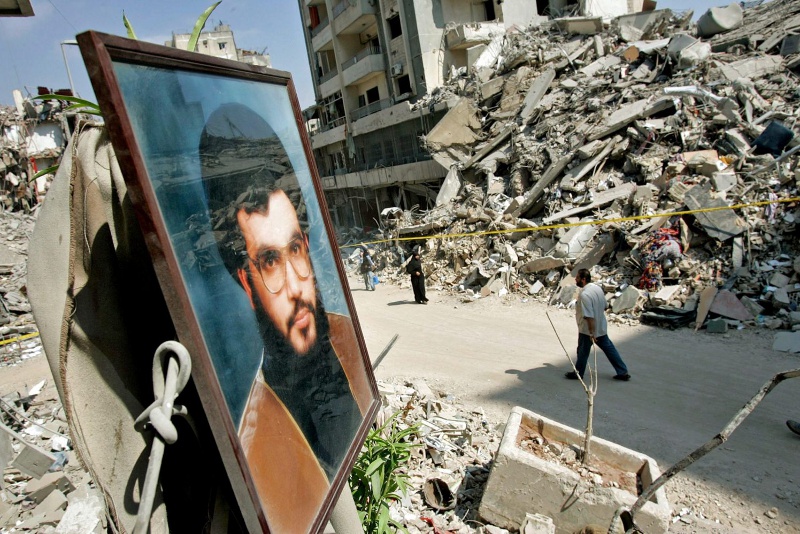 A portrait of Hezbollah leader Skeik Hassan Nasrallah placed on a destroyed street, in the Hezbollah strongholds of the southern suburbs of Beirut, Lebanon, Aug. 16, 2006. Hussein Malla, AP

It is not practical to give a complete analysis of the coverage of the war, but it is possible to make some, less than complementary, observations and criticisms of what has been seen in all the coverage. The observations apply to BBC and ITV coverage in the UK, but by all accounts much the same could be said for CNN, but not Fox News.

These observations will not be acceptable to a world steeped in its own righteousness and ignorance of God’s plans and purposes. Neither will they be acceptable to the Politically correct, the liberal Christian and to Man who has created God in his own image. But that should not prevent uncomfortable questions being raised.  We need to be able to apply our minds and identify the enormous holes in the thinking of the media campaigns against Israel.

It was most noticeable that news shows were adopting a campaigning style in place of a reporting and analysing style. Julian Manyon (ITV) could be seen incandescent with rage at the events he was reporting, but he clearly had made no attempt to look behind the story being presented to him by his hosts in Lebanon. ITV even had their news anchor man stationed in Beirut for the whole show.

One wonders if the absence of analytical content on British TV is part of the general "dumbing down" of Television. The search is for emotion and spectacle rather than clear thinking or efforts to challenge the veracity of any material from sources portraying suffering. The style of TV news is moving towards soap opera histrionics, with mood music and camera gimmicks. It is interesting to note the views of veteran radio journalist Bob Simpson, who died recently. His obituary remarked, "… Simpson realised that his opportunities for foreign reporting were drawing to a close, because of his age and because of his formal style, which eschewed the treacly revelation of inner feelings, …."

Much of the video footage on TV is shot and edited by Arab cameramen, but this is spliced in with "piece to camera" footage by the broadcasters without acknowledgment. Thus the viewer is given no opportunity to decide how far to believe the footage to be impartial and objective.

Typically, the seventeen minutes coverage of one day’s fighting included only one minute on the suffering in Israel. The BBC and ITV used all the footage at their disposal which made dramatic viewing without weighing or verifying the message being given. While the Lebanese people fleeing the fighting could not be denied, one had to have access to independent sources to know that Israelis were also fleeing south from the rocket bombardment. TV stations in Israel were running banners below their programming on which Israelis in the centre and south of Israel published their addresses and ‘phone numbers so that strangers could come and stay with them. While the Lebanese refugees performed for the cameras, the Israelis quietly got on with looking after each other. With no balancing footage from the Israel side, the media ran a one sided story, using what it had!

To be fair, when footage of Kutyusha missiles being launched from civilian areas in Lebanon became available, the broadcasters did concede the difficulty this posed for Israel. However, the sympathetic comments only lasted as long as the clip.

British TV coverage often started from the premise, stated explicitly, that Hizbollah was responding to Israeli attacks on Southern Lebanon. The experience of the IDF when it entered southern Lebanon showed that Hizballah had spent all the time available since Israel’s pull-out in 2000, preparing for war by building bunkers, building tank traps and deploying rockets and arms around the territory. (They have been conducting their campaign without needing to re-supply their rocket launching sites with vulnerable convoys.

Channel 4 even had the audacity to analyse Israeli media coverage of the conflict and criticise it for concentrating on the rockets landing on Israeli cities rather than what was happening to people in southern Lebanon. Pots and kettles comes to mind.

The pictures, as in most such stories, show damaged buildings and allow us to conclude that cities have been reduced to rubble. A map of Beirut shown on one (un-named) TV channel shows that most of Beirut is untouched, whilst 1% has been attacked. (the airport where armaments are shipped in and the Hizballah areas in the south of the city.

The death of four UN Peacekeepers brought enormous condemnation on Israel, but no pertinent questions were asked. The comments of the Canadian who died were not mentioned. He spoke of the Hizballah fighters sheltering by the UN post and hiding behind it. People should have been asking why the UN soldiers were even still there.

The peacekeeping force failed to enforce the UN Resolution 1559 by ensuring that Southern Lebanon was controlled by the Lebanese army after Israel pulled out in 2000. They failed to stop Hizballah building up an armed state within a state (supplied by Iran and Syria). They did nothing to prevent Hizballah launching thousands of rockets at Israeli cities. So they might as well have been pulled out when Israel started to respond, rather than staying as an umbrella for Hizballah fighters and, as it turned out, sacrifices for the cult of martyrdom practiced by "The party of Allah" (Hizballah).

ITV proudly presents the death toll on every broadcast, like the football scores. Since the number of dead is much higher on the Lebanese side, the inference is that those with the highest death toll are the victims and most worthy of sympathy.

The Lebanese dead are always referred to as civilian. But, all the Lebanese dead will be civilian, since any Hizballah terrorists who are casualties are not members of an army, and have discarded any sort of uniform so that they can merge into the population. The high death toll among women and children is a function of Hizballah (and Fatah and Hamas) method of fighting; using women and children as human shields. This has two benefits. 1) it inhibits the Israeli attacks on homes for fear of hurting non combatants. 2) when women and children are killed or wounded, it is a propaganda weapon to use against the Israelis.

Clearly it would not be expected that TV News would acknowledge the hand of God in the lower death toll in Israel, but this has to bet be a factor. Stories abound like that of a rocket hitting a school room while the students were locked out by a caretaking error, or the rocket that managed to miss four tower blocks and explode in the small, empty, green space between them. How sad that God’s protecting hand counts against Israel in the world’s eyes.

The "collective punishment" of Lebanon

This argument has been used extensively, inferring that Israel is destroying Lebanon because of Hezballah. This completely ignores the facts.

Lebanon’s government and army have done nothing to discourage Hizballah from establishing its military bases for attacking Israel.

The Lebanese army appears to have been cooperating with the terrorists. They must have provided the coordinates for the radar guided missile that hit an Israeli warship.

The people of Lebanon elected Hizballah representatives to government positions.

The people appear to have been happy enough for Israel to be attacked from their apartment buildings.

By any normal rules of common sense, they brought the disaster upon themselves by their complicity and by underestimating the resolve of Israel.

This is a largely spurious argument. The civilians elected the government which is responsible for bringing the disaster upon them. They also accepted the presence of those who were attacking Israel. The well-being of children is the responsibility of their parents, and responsibility can not merely be heaped on to Israel.

When Israel reports having killed a number of Hizballah fighters it is immediately denied. Therefore, since no fighters have been killed, all the casualties must be counted as civilian.

This accusation is thrown at Israel repeatedly, but nobody asks, "disproportional to what?" Iran, the nation behind Hizballah, has vowed to destroy Israel with nuclear weapons, but Israel has not responded to that level of threat.

If it bleeds it leads

The coverage has blatantly been driven by the supply of footage of weeping and wailing "victims". As with so much from the Middle East, the cultural differences are never considered. If an Arab woman is willing to weep and wail, it is all recorded ( often by Arab cameramen) and dutifully and uncritically broadcast by western TV channels. The fact that the Israelis have a more European approach and cope with a quiet dignity counts against them. Sad stories of folk who could not afford taxis to escape the fighting were broadcast without comment about profiteering. Israelis were just helping each other.

There appears to be a squeamishness about referring to terrorists. One correspondent has started referring to "Islamist resistance movements" strengthening their position after the attack on Qana. They aren’t resisting; they instigating the violence.

"Israel says no to Ceasefire"

Israel’s refusal to call a ceasefire makes headlines – to their detriment. But nobody asks if Hizballah is willing to cease fire. Presumably we all know what the answer would be, but we do not expect so much from them.

Israel is pilloried for every shortcoming, while the same things are accepted when other nations do them ( particularly our "friends" ) No other nation would endure hundreds of missiles from two fronts without responding forcefully. Why is our media cheerful about the deaths of Afghans who are not threatening us, while it is a different story for Israel, which is under attack?

Israel’s reconnaissance footage of Hizbollah arms deliveries in Qana, which prompted the attack were discounted because they were two days old. No allowance was made for the time required for Israel to drop leaflets on the town, warning the inhabitants to leave before the attack.

Israel apologizes for the deaths of children

Failure to criticise Israel’s enemies or remember what happened before.

Hizballah’s suggestion that they "did not expect this response" from Israel is reported without challenge, as if Israel responded unreasonably to a minor provocation. It should be obvious that this claim is incompatible with the time and effort Hizballah expended preparing for war with Israel.

Reporters appear to have forgotten that Hizballah was responsible for killing 241 US service personnel in Beirut in 1983. They treat them as a recent reaction to Israeli provocation rather than one arm of the Iranian/ Muslim war on the West.

- see article quoting The commander of the IDF's 91st Division