"your old men will dream dreams, your young men will see visions." Joel 2:28 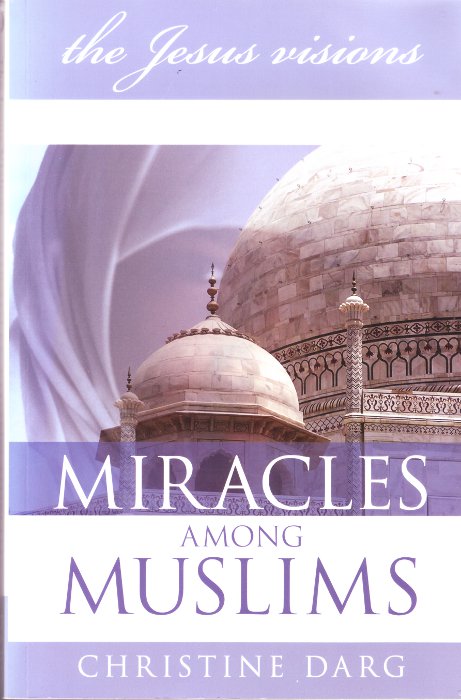 Much of what we Christians understand about the Muslim perspective on Christians and Jews is very discouraging.  However, one can be very pleasantly surprised.

On one occasion I was travelling home by train, reading Christine Darg's book on the Jesus Visions. When I got on to an overcrowded train, the only seat for me was one of a pair of single seats facing each other over a small table.  Seated in the other seat was a young Muslim man  (Maybe 18 - 25 years old)
We smiled to each other as I sat down and he continued reading his Islamic study books.   I settled down and re-read the first part of Christine's book in order to make some notes.

I prayed silently, saying that I was not going to start an un-anointed religious argument but that I was up for what the Spirit may have in mind.  After a while this young man asked me what I was reading, so I could do nothing but spin the book around to show him and explain that it was written by my friend who ministers around the Middle East and it is all about Muslims who have been having dreams and visions of Jesus.  He was quite excited, and replied that,  "we talk about Jesus all the time."   My young friend talked animatedly and he proved to be really friendly and very earnest about his faith.  He told me he had just recently been to sit under the teaching of a Sufi Imam.

He was most taken with one of the imam's teachings.
The Imam had taught him that if one is confused by religious arguments, one should go home, have a shower and sit in a dark room and pray that God would reveal the truth.

I obviously pray that this young man will go home and do just that, and that Jesus will reveal the truth to him.

I was interested to hear what he believes as he told me that all three faiths lead to God.  He believes that if we are sincere, God will use a stay in Hell to make us all fit for heaven.  Although I gently declined to share this view I said that I know I am not good enough, but that I am trusting Jesus for forgiveness before I die.

Christine Darg's new Book,  "The Jesus Visions"   contains many amazing testimonies of how Jesus has appeared to Muslims and brought them to faith in Him.

Christine also speaks of ways in which Jesus has ministered healing to Muslims, because the Qur'an speaks of Jesus' healing power. See footnote on Healing.

This book contains so many clues for informed and hopeful prayer for the world and the 10-40 window.

Having read the Qur'an (in an approved English translation) I could see little chance of it leading people to Jesus, but this book contains the testimony of a man who found the Qur'an pointing him towards the Injil (the Gospels) and to Jesus the Messiah.

Here are a few wonderful things that this man discovered....

In the 114 Suras of the Qur'an, no sin is attributed to Jesus, but in Sura 40 Mohammed is commanded, "to ask protection and forgiveness for your fault."   (you will also notice that Mohammed is not credited with any miracles, but Jesus is, and that Jesus is accorded the title of the Messiah - although its significance is not explored)   This led this man to check out how special Jesus was, knowing that the fourth Sura said,

"They say we killed the Messiah, the son of Mary.  He was not killed, he was not crucified.  Another person who resembled him was killed in his stead.  God raised a living Jesus into the sky."

But the next day he found in the third Sura,

"Oh Jesus I will make you taste death.  I will raise you up unto me, and I will deliver you from the unbelievers and those who follow you will be above those who do not believe in you until the day of resurrection.  You will return to me.  I will judge your differences."

As he continued to seek the truth, he discovered, in Sura 19, the infant Jesus saying,

He said, "After six months of investigation, I realized that the Qur'an confirms the Bible and that Jesus is above the other prophets.  He is the Messiah, the Apostle of God, Mary's son, the Spirit of God, the Word of God.  I was further convinced that He was crucified."  The story continues with Jesus' appearing to him and the man coming to saving faith in Him.

The book is full of thrilling accounts such as this.  It also contains a thorough discussion of the place of dreams and visions, throughout the Bible and in the "Last Days".


Get the whole story by ordering your own copy via www.exploits.tv .

The Jesus Visions is Christine Darg's web site account of the miraculous works Jesus is doing in the lives of Muslim people; appearing to them in dreams and visions and convincing them of His love for them.   www.jesusvisions.org

Good news of Jesus in the Qur'an

The Qur'an speaks of the Annunciation, meaning that Jesus is the Messiah (the anointed one) and the Word from God. (according to the Authorized English Translation)

[Sura 3:42] The angels said, "O Mary, GOD has chosen you and purified you. He has chosen you from all the women. [3:43] "O Mary, you shall submit to your Lord, and prostrate and bow down with those who bow down." [3:44] This is news from the past that we reveal to you. You were not there when they drew their raffles to select Mary's guardian. You were not present when they argued with one another. [3:45] The angels said, "O Mary, GOD gives you good news: a Word from Him whose name is `The Messiah, Jesus the son of Mary. He will be prominent in this life and in the Hereafter, and one of those closest to Me.' [3:46] "He will speak to the people from the crib, as well as an adult; he will be one of the righteous." [3:47] She said, "My Lord, how can I have a son, when no man has touched me?" He said, "GOD thus creates whatever He wills. To have anything done, He simply says to it, `Be,' and it is. [3:48] "He will teach him the scripture, wisdom, the Torah, and the Gospel." [3:49] As a messenger to the Children of Israel: "I come to you with a sign from your Lord - I create for you from clay the shape of a bird, then I blow into it, and it becomes a live bird by GOD's leave. I restore vision to the blind, heal the leprous, and I revive the dead by GOD's leave. I can tell you what you eat, and what you store in your homes. This should be a proof for you, if you are believers.

Concerning the death of Jesus, there is a divergence between the Qur'an and the Injils (Gospels) but it is not insurmountable.

Followers of Jesus obtain salvation by faith through the Cross of Jesus and his substitutionary death on the tree as God’s sacrificial Lamb.  The Cross, the very heart of the Gospel, is not understood in the Koran. Yet the act of a crucifixion is not totally denied:

"And because of their saying: We slew the Messiah, Jesus son of Mary, Allah's messenger. They slew him not nor crucified but it appeared so unto them; and lo! They have no knowledge thereof save pursuit of a conjecture; they slew him not for certain." (Surah 4: 157)

On the basis of this text, Muslim commentators teach that Jesus did not die but they suggest that Judas Iscariot or Simon of Cyrene was substituted. In their estimation and according to human understanding, Jesus was too good to die.  Thus the heart of the Gospel is tragically not explained in the Qur'an.   It was necessary for Jesus to die--not as a victim but as a volunteer--so that the world would have a Saviour.

However, the following verse in the Qur'an does refer to the death and resurrection of Jesus:

These notes are quoted from accounts of the ministry of Jesus documented by Christine Darg.

See also teaching and testimonies from Nathan Jones, of Lion and Lamb Ministries. It includes encouragement for Christians to share with Muslims by pointing out suras in the Qur'an that connect to the Bible. www.lamblion.us