Also at your times of rejoicing--your appointed feasts and New Moon festivals-- you are to sound the trumpets over your burnt offerings and fellowship offerings. Numbers 10:10 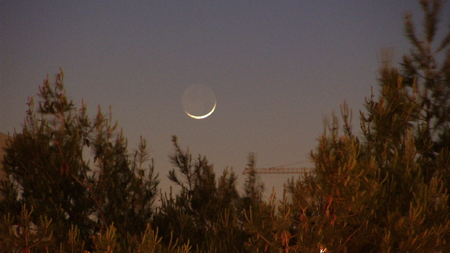 The New Moon observed from Jerusalem on 25th May 2009 by Karaite Jews and photographed by Yehoshua Newman.

The New Moon is the start of the month in the Jewish (lunar) calendar.   Rosh Khodesh literally means "head of the month"

In Old Testament times it was a day like Sabbath for rest, worship and sacrifices (the monthly burnt offering   (Numbers 10 v10)   In Ezekiel 45 v17 we read how the prince was to be present with the people for the offerings on Shabbats and New Moons.  In Haggai we read that Prophets were consulted at New Moon holidays.

"Sound the Shofar at the New Moon and when the moon is full on the day of our feast.  This is a decree for Israel, an ordinance . . . . ."

One time when God was displeased with his people he said,

"Stop bringing worthless grain offerings!  They are like disgusting incense to me!  Rosh Hodesh, Shabbat, calling convocations  -  I can't stand evil together with your assemblies!  Everything in me hates your Rosh Hodesh and your festivals;  they are a burden to me  -  I am tired of putting up with them!"

An important point to note about the New Moon is the manner God chose the calendar to be fixed, thus determining when the Holy Days and Feasts would be celebrated.   This is not the system of calendars with which we are familiar.   These can be calculated years ahead without reference to God.   The New Moon, Rosh Hodesh celebrated in Torah was literally the day on which the new moon first appeared as a slim crescent.   Only when witnesses had seen it and testified to the Sanhedrin would the Shofarot sound to announce the holiday.

The New Moon on our calendar (and tide tables -  New Moon is the time of greatest variation between high and low tide, due to the gravitational pull of Sun and Moon acting together) is actually the time of conjunction of Sun and Moon.   At this time the side of the moon facing the earth is totally in shadow and can not be seen.

As the moon moves away from the point of conjunction we get our first view the edge of of the sunlit side.  This occurs just after sunset, very close to the position where the sun disappeared below the horizon.

The pictures are a small section of a computer generated view of the sky.  If the  picture is held above your head looking towards the South West (for these pictures)  they give  a guide as to where celestial bodies can be expected.  These pictures  are looking at the South Western part of the sky as seen from Jerusalem.  (the pink line is the horizon).   In the left-hand picture the sun is still in the sky and overpowers the moon.  The right-hand picture is one hour later and the New Moon should be visible in the darkening sky.  Within another hour, the moon will also have disappeared below the horizon.    The upper views were computed for  1620 and 1720 local time  on December 5th 2002.  The lower views are for 1620 and 1720 on December 6th 2002.

In the top pictures you can see that the New Moon is so low in the sky when it becomes dark that an observer would be very unlikely to catch it.  The following day it is much more likely to be seen

Of these days, December 6th was far more likely to be Rosh Hashannah.     This shows that observing the new moon requires careful waiting and watching.

The Jewish Patriarch Hillel II decided, in the fourth century, to apply the long known mathematical method of fixing the New Moon  to calculate the Jewish calendar for years ahead.   This calendar has slipped by about two day since then.

Today, New Moons are marked only with some additions to the liturgy.    Part of the Hallel is added after the Shmoneh Esrei (18 prayers) and there are some extra Torah readings.   In some communities, women refrain from work  (as a reward to women for not getting involved in the Golden Calf incident.   (information from the Orthodox Union website).   Some Messianic fellowships are starting to  watch for the new moon and sound the shofar.

But the spiritual lesson of the New Moon is one of waiting for God's appointed time, revealed in His appointed way.  The beginning of the New Year, which is the Biblical Yom Truarch /  Day of Blasting, / Trumpets is (or should be), obviously a New Moon.  This day is known traditionally as "the day and hour no-one knows";  a phrase Jesus used of His second coming.  This connection reinforces the message that we should be watching the signs, for the day when the Messiah appears with a trumpet blast from Heaven.

Try using a concordance or CD Rom Bible to find all the references to the New Moon.  There are at least twelve.