For I hear the slander of many; there is terror on every side; they conspire against me and plot to take my life. Psalm 31:13 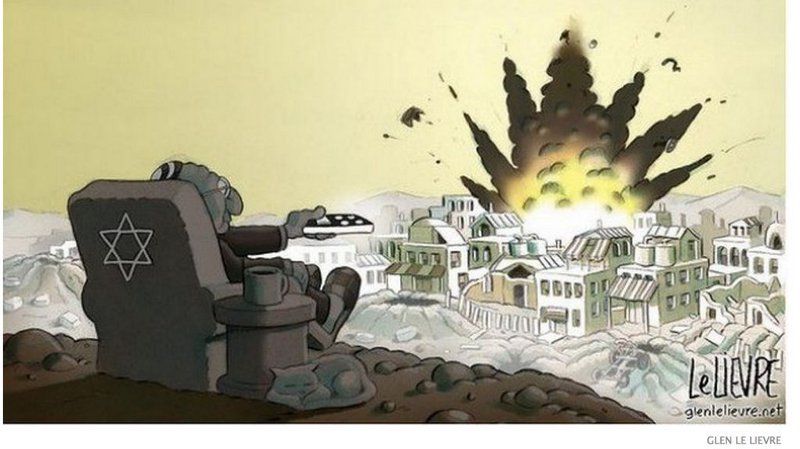 One celebrated Palestinian was exposed as having manufactured his life history as a dispossessed Palestinian Israeli when he had actually been born and raised in Egypt.  He had visited a relation in Israel.

An important constituent of Palestinian Authority politics is the implanting of the most beneficial terminology into western media , and thus into western minds.

The use of "Palestine" has been so insidiously introduced that it can be found in Christian books about the life of Jesus.  The word had not even been coined in his time!      Judea was renamed Palestine by the Romans in 70 AD / CE after they had crushed the Jews.   Jesus lived in Judea, Galilee and Samaria.

Within one year the name of the Temple Mount has been replaced by "a holy hilltop site" and "the Al Aksa Mosque complex"  (Teletext news, British Television March 2002)        see  The Temple

The term "Occupied Territories" is very emotive, and is accepted without question by everybody, including the Israelis.  But who is actually occupying who's territory?   The West Bank was part of the territory allocated to Israel by the United nations but seized by Jordan in the May 16th war of 1948;  an acquisition which was never ratified.  Israel recaptured it in 1967.  Surely the Palestinians are occupying Israeli territory!    (see Land)

The Palestinian "Refugee Camps" are actually towns of stone buildings with all facilities including satellite dishes.  The name, however, conjures up images of displaced persons living in squalor and poverty.  (See pictures of Jenin, in Media Bias)

British television news coverage of the violence in Israel  spoke of "plastic coated steel bullets" being used against demonstrators.   When we use them they are called "rubber bullets".   The facts may have been accurately reported but the bias is clear.

"The Protocols of the Elders of Zion"

"The Protocols of the Elders of Zion" has  been a long standing favourite of the Palestinians and their supporters.  It has been translated into Arabic and published several times, as well as being turned into a series for Television.   "The Protocols of the Elders of Zion" purports to the record of a secret meeting of Jewish leaders in which they reveal their plan for world domination.   You will find those on the Internet who believe this to be the case.  (Nazi and Arab, anti-Israel sites).   The Protocols was in fact written at the end of the nineteenth century, by the Tsarist secret police.   The origin of the Protocols was exposed in 1921 but, like all conspiracy theories, it endures remarkably well.

Deaths due to terrorism and counter-terrorism.

The western media often quotes the death toll of Israelis and Palestinians and derives a kind of moral equivalence.  This gives a spurious moral advantage to the Palestinians as victims, suffering the worse casualties.

Remember that the Palestinian dead includes the suicide bombers, the gunmen who instigate shoot-outs with the I.D.F  and others ...... 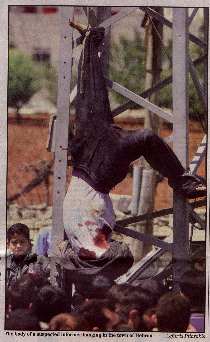 The body of suspected collaborator, Moussa Arjoub in Hebron, 23 April 2002.

Also included are the Palestinians suspected of collaborating with Israel who are lynched by their Palestinian neighbours.

(Apparently, even  road accident victims are included in the PA figures)

Christian Arab George Khouri, mistaken for a Jew and shot by Fatah in Jerusalem on 19th March 2004, was declared a martyr by Yasser Arafat.

It is calculated that Palestinians are directly responsible for the deaths of one in eight of the Palestinians killed.

To see and hear what is actually being said and preached in Mosques in the Middle East visit the Middle East Media Research Institute website.    MEMRI monitors and translates Arabic Media to make the information available to the English speaking west.              www.memri.org

Visit the Palestinian Media Watch to find out what the Palestinian Authority is saying in Arabic to its own people.      Find out about the cynical indoctrination of children to become "martyrs".     www.palwatch.org

To understand how the world's media, and the Palestinian people,  received the material for its campaign against Israel , you need to visit  Second Draft.   Their research shows how grievances, such as the death of Mohammed al Dura are created and marketed.         www.seconddraft.org

The use of Palestinian Children

The stories which the Palestinians feed western journalists make much of supposed harm done to children by the IDF.  This strikes an emotional chord with western families and always produces reactions against Israel.   However, the Palestinians are guilty of cynically exploiting children and young people by inciting them to confront the IDF security forces and having cameramen  on hand to record whatever harm comes to them.  Also we are fed with harrowing images of distraught mothers of dead or wounded children.   See Indoctrination to see how the Palestinian children are exploited and sacrificed to further the aims of Arafat and the Palestine Authority.

Watch the video, "The Anatomy of Child Self-Sacrifice", produced by Jerusalem Vistas to understand how the process works.   Get a copy to show to your church or fellowship or school/college.

One of many cases was the 11 year old lad from Nablus who was promised a large sum to carry a backpack through an IDF roadblock in March 2004.  When a military policeman picked up the backpack he discovered it was a 10Kg bomb stuffed with bolts.   When the boy's dispatchers saw that he was being detained they dialled the mobile 'phone which was supposed to detonate the bomb, but it failed to explode.   Had the bomb properly detonated, the lad would have become a martyr.   Palestinian children are frequently used to test Israeli security systems.   If they are mistaken for terrorist infiltrators and shot in error, they become martyrs and propaganda tools for use against Israel.

See also the report on the death of Mohammed Al Dura, which was blamed on the IDF and used to fan the Intifada which had just started in September 2000.

Ahed Tamimi, a young Palestinian activist notorious for spreading anti-Israel propaganda through “Pallywood” productions, was arrested for physically abusing IDF soldiers, who refrained from responding to the assault.
Last Friday at noon, two Palestinian teenaged girls in the village of Nabeh Saleh, northwest of Ramallah, attacked IDF soldiers on the lookout for rock-throwing, Molotov cocktails and other acts of violence common in the area.
Waving their cameras, the teens yelled, kicked and shoved the soldiers and even slapped one of them in the face.

One of the girls was 17-year-old Ahed Tamimi, whose family is well-known for spreading lies about Israel and creating “Pallywood” performances.
Pallywood, a blending of the words “Palestinian” and “Hollywood,” is a term used to describe media manipulation, distortion or fraud designed to win the public relations war against Israel.
The soldiers refrained from returning the violence, but the IDF showed up at the Tamimi home during the night and arrested Ahed.

Funerals make good news footage and stoke up the fires of hatred.   Unfortunately we in the west did not get to see the film of the Palestinian funeral during which the pallbearers stumbled and dropped the corpse, which then got up and ran away.

Historical revision is a backbone of Palestinian political and academic behavior, as the leaders attempt to create a separate "Palestinian Arab" history and identity for themselves, distinct from the general Arab and Islamic history. "Palestinian" Arabs are a very recent creation, and did not exist before the advent of PLO terror in 1965. Note, for example, that under UN resolution 194 in 1948, refugees were not called "Palestinian Refugees," relating to a national identity, but were called "Palestine Refugees," referring to geography - from where they came.

One aspect of this attempt to create a Palestinian history is to present Jesus, who was a Jew living in the land of Judea-Israel, as a Palestinian. (In fact the name was changed to Palestine 136 years after Jesus' s death as part of Rome's plan to cut the Jews' ties to their Land of Israel.)

Jesus has even been presented by Palestinians as the "the first Palestinian Shahid – Martyr for Allah," [Al-Hayat Al-Jadida, January 17, 2005] applying to Jesus Islamic theology that evolved centuries later. 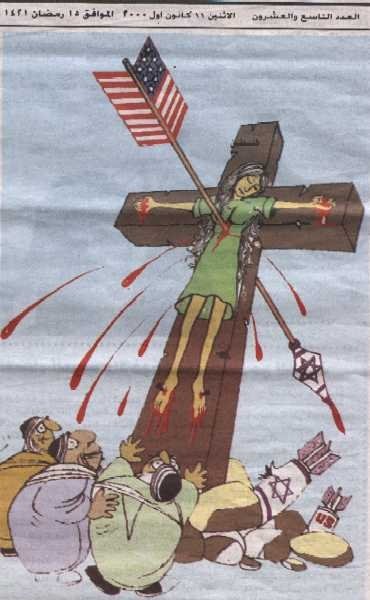 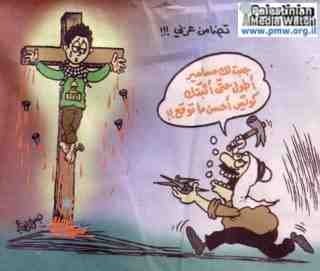 The following are some of these examples identifying Jesus as a Palestinian:

1. "We must not forget that (Jesus) Messiah, may peace be upon him, is Palestinian, the son the Mary the Palestinian, who is sanctified by hundreds of millions of believers in this world."
[Al-Hayat Al-Jadida, November 18, 2005]

2. "It was quite natural that the Palestinians rose to save their sanctuaries [in Nazareth] without anyone thinking there is a difference between a Christian and a Muslim… since in the Palestinian situation, the lord Messiah [Jesus] and his mother [Mary] are both Galileans and Palestinians …"
[Al-Hayat Al-Jadida, March 9, 2006]

3. "The Palestinian Galilee village of Kfar Kana takes pride in the fact that in [the village] the Palestinian Messiah succeeded to turn water into wine."
[Al-Hayat Al-Jadida, December 14, 2004]

Jesus is likewise defined as a Shahid (Martyr for Allah):

4. "…And a child from the De’haisha refugeecamp will shout: "Yes, we have won, just as the prophets and [Jesus’] Apostles won," and the shahids will cry, ‘We shook the palm trees alongside Lady Earth and the lady of the people, the Virgin Mary, and with her son the first Palestinian Shahid."
[Al-Hayat Al-Jadida, January 17, 2005]

6. During a culture program, a Palestinian artist depicts Israeli soldiers arresting Jesus, and explains that Jesus symbolizes the Palestinians.


Artist: "Our struggle today against the other side is an eternal one. It can be said that it started 2,000 years ago and continues until today. I demonstrate this through the figure of Jesus… The Israeli soldiers are wearing army uniforms while Jesus has nothing except for the truth. When they searched him at the entrance of Jerusalem, they found a stone, a piece of bread and fish and he was cuffed. This is the Palestinian from the beginning of the struggle until the end."
[PA TV, July 21, 2000]

Misappropriating Jesus into Palestinian Islamic tradition allows the image of the Crucifixion to become a Palestinian symbol, which they then use to portray themselves and other Muslims as victims of Israel.

This identification of Jesus and his crucifixion with Palestinian issues makes the Islamic objective of destruction of Israel and the Jews more readily accessible to those Christian Arabs who have been steeped in Replacement Theology and Anti-Semitism.

Or - another slant (lie)

Jesus... the virtuous patriotic Palestinian forefather...brought forth his New Testament and spread it among mankind - which led the Jews to persecute him until they caught him, crucified him, and murdered him"


"The Zionist movement... wanted to falsify historical facts, to exile and crucify the Palestinian Arab nation and then murder it"
http://palwatch.org/main.aspx?fi=157&doc_id=8979