" ... And who knows but that you have come to royal position for such a time as this?" Esther

Purim or the Feast of Esther 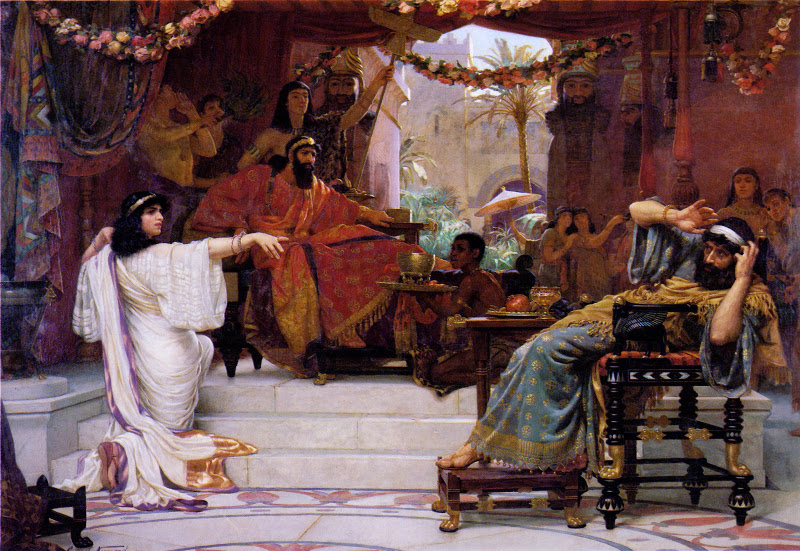 Purim,   or the Feast of Esther, celebrates God's deliverance of his people  through the wisdom and godliness of a beautiful woman.  The book of Esther tells the story, giving the glory to GOD without once mentioning him by name.  Esther was a Hebrew named Hadassah  (Myrtle) who married the king of the land where the Jews were in exile.  Due to her influence with the king she was able to thwart the efforts of Haaman, a powerful court official.

Purim is Hebrew for  "Lots" since Haaman cast lots in order to decide when to carry out his evil plan.

Since the book of Esther does not contain the name of God, people are free to handle it in ways they would not think of with other scrolls of the Tanakh.   Many people follow the story in their own scroll, called a Megillah.   Some are very beautiful, and this one is very small and exquisitely made. 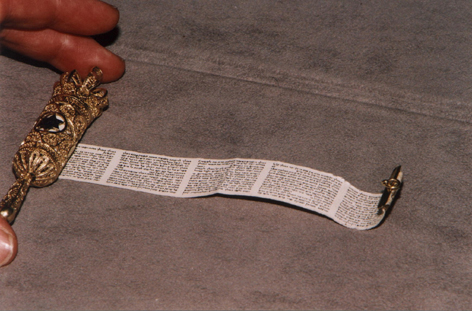 As the story is told in the synagogue or in school, the children hiss, shake noisy rattles  (graggers ), shoot their toy guns and generally make a lot of noise every time the name of Haaman is mentioned.  Children also have fancy dress parties, with costumes of pirates and modern day villains being especially popular.

Gifts are exchanged ( usually boxes of sweets and biscuits)  A special filled pastry is eaten, called Haaman's ears.  These recall how Haaman's ears were his downfall when he listened to those who suggested he use his position to bring about the destruction of the Jews.   The day before the feast is "the fast of Esther", recalling how Esther had all the Jews fast and pray that her bold plea to the king would be accepted.  An "Esther Fast" is practiced by some believers seeking to have really serious dealings with God.

The story of Esther is the source of the quote,  "Who knows but that you came to the kingdom for such a time as this".   It was advice given to Esther when she got her opportunity to speak up and save her people, but it often comes to motivate Christians to action.

If you look on a Jewish calendar you may notice an extra day, Shushan Purim, and wonder what it is.

According to Esther 9 v20-22, the Jews prevailed over their enemies on the 13th of Adar and on the 14th they feasted to celebrate the victory.  But in Shushan, the capital (a walled city) the battle lasted another day and the holiday was celebrated on the 15th.   When the sages instituted Purim they took account of this and created Shushan Purim, to be celebrated in walled cities.   The qualification of a walled city was being walled at the time of Joshua, which means pretty much, that it only applies to Jerusalem.   For fuller explanations see,   www.aish.com/holidays/purim  or  www.ou.org/chagim/purim/when.htm

Since the Jewish leap year has two months of Adar;  Adar I and Adar II.  Purim is observed for 2 days in Adar II.  The 14th and 15th of Adar I are traditionally celebrated as "Little Purim".   These are days for celebration; not mourning.

Deeper meanings behind Purim, derived from www.aish.com where there are over twenty pages of teaching on Purim.

Haman and his hatred of the Jews -  Haman was a descendant of Amalek -    Amalek was the grandson of Esau and the Midrash says that Esau told Amalek to kill Israel (Jacob) as he had been unable to.  It was the tribe of Amalek that attacked the stragglers of Israel during the Exodus; out of pure hatred - they did not even live close.

Moshe’s raised hands symbolize the Jews raising their eyes heavenwards, in commitment to God and Torah.

Jacob represents faith in God - Esav represents the opposite - Atheism

Amalek had a vested interest in attacking the Jewish people, whose very existence proved the existence of God to the world. They proved that spiritual powers exist, and that there are absolute values.

So why do we have to stomp out Haman?

Because we recognize our enemies and fight them. Not because we enjoy war but because part of being a good person is to actively seek the destruction of evil.

Rabbi Shimon Apisdorf said, "The gragger in the hand of a child on Purim is there to remind us how to relate to evil. Not by labelling it as sick and psychoanalyzing it into oblivion, but by calling it what it is – evil – and dealing with it as bluntly as it would deal with us."

Consumption of alcohol makes a person lack normal inhibitions. Someone who gets drunk in a lewd, wild environment, will most likely lose inhibitions in lewd and promiscuous ways. This is forbidden. But if someone consumes alcohol in an environment of Torah and spirituality, with intent to grow from the experience, he will be able to become more holy. We are not used to thinking along these lines, but many who have done so successfully can tell you that it is true nonetheless.

On Purim, when we become drunk, we are saying that ultimately we don't even have enough faculties to know the difference between one who is cursed and who is blessed. We try to do what seems correct, but we realize that it is only God who knows what is right for us. And only He controls the world.

One fundamental lesson of the Purim story,  while we humans like to feel that we are running the world and controlling our destinies, at the end of the day, God is behind it all. As the Talmud (Megillah 12a) indicates, the Jews felt they were helping their political relationship with the government by attending King Achashverosh's grand feast. In reality, their very attendance at the feast was the spiritual trigger for Haman's evil decree to annihilate the Jewish people.

What was Achashverosh celebrating, anyway? He foresaw (incorrectly, of course) that the Temple in Jerusalem would never be rebuilt and the Jews would never again achieve independence. This is why he paraded at the feast wearing the special garments of the Jewish Temple priests. 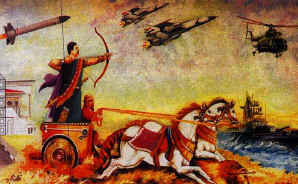 Hatred of the Jews -  Anti-Semitism and its relation Anti-Isrelism are still alive and well and threatening the Jews, particularly those in Israel.   Among those most vocal and threatening was Saddam Hussein, who attacked Israel in the first Gulf War and threatened to do so again in the second.  Saddam Hussein believed himself to be the second Nebucadnezzar, and was rebuilding the works of the first.   (Check out Daniel 4)

Iraq corresponds to Babylonia, not Persia which is Iran.    Persia  inherited the exiles from the Babylonians who first carried them away.

Iran is on course to becoming a nuclear power very soon and is threatening Israel.   Iran's President Ahmadinajad called for Israel to be wiped from the map and the drive continues; although with a little more subtlety.

The lectionary reading for Purim is , not surprisingly, Esther.