But the fact is that the Messiah has been raised from the dead, the firstfruits of those who have died. 1 Corinthians 15:20

Shavuot is the fourth feast in the cycle of seven mode'im (appointed times).  This feast is the second pilgrimage festival and is known as "the festival of revelation".  it falls on the 6th of  Sivan   ( May   June )

From the day after the Sabbath, the day you brought the sheaf of the wave offering, count off seven full weeks. Count off fifty days up to the day after the seventh Sabbath, and then present an offering of new grain to the LORD. From wherever you live, bring two loaves made of two-tenths of an ephah of fine flour, baked with yeast, as a wave offering of firstfruits to the LORD. Present with this bread seven male lambs, each a year old and without defect, one young bull and two rams. They will be a burnt offering to the LORD, together with their grain offerings and drink offerings--an offering made by fire, an aroma pleasing to the LORD. Then sacrifice one male goat for a sin offering and two lambs, each a year old, for a fellowship offering.  The priest is to wave the two lambs before the LORD as a wave offering, together with the bread of the firstfruits. They are a sacred offering to the LORD for the priest.  On that same day you are to proclaim a sacred assembly and do no regular work.   This is to be a lasting ordinance for the generations to come, wherever you live.

Shavuot starts after seven weeks from  Passover.   (7 weeks is 49 days so the day after is the fiftieth - Pentecost is Greek for fifty days)  This is the time of the wheat harvest in Israel, and Shavuot is a Firstfruits feast for the wheat harvest.

On the day called Reishit Katzir - "the beginning of the harvest" or "Firstfruits" (Barley harvest) at Passover, a sheaf ( omer) or barley was waved before the LORD. From then on, an omer is counted for every day until Shavu'ot. This period is called "the counting of the omer".

There was disagreement between Pharisees and Saducees as to the definition of the Sabbath after Passover. ( Leviticus 23 v15 above ) Was it the first day of unleavened bread, which would (as a high holy day) be a Sabbath, or was it the next (Saturday) Sabbath? Rabbinic Jewish practice follows the Pharisees, so most Jews celebrate Shavuot  seven weeks after the Passover day. But the Karaites always celebrate it on a First Day (Sunday).   See  karaite-korner.org -- hebrew4christians.com -- aish.com 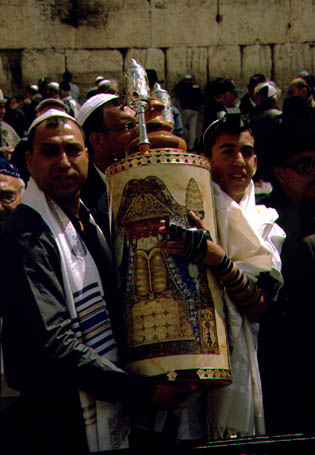 The giving of the Law (Mantan Torah) is also celebrated at this time.

(Not to be confused with Simchat Torah , (rejoicing in the Law) which is celebrated at  Sukkot)

It is calculated that GOD gave the torah to his people at Mount Sinai,  fifty days after they left Egypt.     ( Exodus 19 )    Devout Jews stay awake through the first night to purify and elevate their souls and dedicate themselves to studying Torah.   Children starting religious school are given special honey cakes,    GOD'S law being "honey and milk under thy  tongue"     (Song of Songs 4 v11)   Conical cakes are eaten symbolizing Mount Sinai, and dairy products and honey cakes are eaten.

It is significant that the gift of the Holy Spirit, which enables us to please GOD was given on the day of celebrating the gift of the Torah.     The Torah was inscribed on tablets of stone by "the finger of God", which is an expression meaning the Spirit of God.    See also Jeremiah 31 v33,  "This is the covenant I will make with the house of Israel after that time," declares the LORD.  "I will put my law in their minds and write it on their hearts.   I will be their God, and they will be my people.   This is what we really need, to understand Torah.

(The Story of Ruth is read because of its harvest setting and her wisdom and humility.

The Firstfruits of the wheat harvest was celebrated with a wave offering of the first of the harvested produce;  bread made from fine flour from the wheat.  This was waved before GOD.    It expressed the people's dependence on GOD for  bread.   Fine flour represented perfect righteousness.

Jesus referred to himself in terms of the grain of wheat that must fall to the ground and die, to produce much grain.   (John 12 v23-24 )

Perhaps Firstfruits helps explain Paul's exhortation to "offer your bodies as living sacrifices...." (Romans 12 v1)   We are not talking burnt offering sacrifices, but sacrifices waved before God for his pleasure, out of gratitude.    See also Romans 8 v23, .

" Not only so, but we ourselves, who have the firstfruits of the Spirit, groan inwardly as we wait eagerly for our adoption as sons, the redemption of our bodies."

Interestingly, the outpouring of the Holy Spirit on the disciples of Yeshua happened while the Priests were waving the two loaves before GOD symbolizing their dependence on him.   (These were not unleavened bread, they contained chametz ( a picture of sin in the Passover feast)).

Why two loaves ?   See below for fulfilment.

The lectionary reading for Shavuot, in addition to the Torah and Haftorah readings is the book of Ruth - Rut. Harvest imagery is prevalent in the Book of Ruth, with crucial scenes taking place on Boaz's fields and threshing floor. This resonates with Shavuot's status as an agricultural festival.

When the day of Pentecost came, they were all together in one place.   Suddenly a sound like the blowing of a violent wind came from heaven and filled the whole house where they were sitting.   They saw what seemed to be tongues of fire that separated and came to rest on each of them.   All of them were filled with the Holy Spirit and began to speak in other tongues as the Spirit enabled them.

Some translations start,  "When the day of Pentecost had fully come.....",  reminding us that the disciples had been up all night reading and rejoicing in the Torah and praying.  (see above) And those two loaves?     One  was for the Jews and one for the Gentiles.

On the Shavuot described in Acts 2, the Jews received God's spirit outpoured as promised in Joel 2 v28-29

Outpouring of the Spirit also features in Zechariah 12 v10 and 13 v1.

This Zechariah/Romans outpouring is yet to be fulfilled but will be the most wonderful end-times deliverance; accomplished by Messiah.

The other loaf was for the gentiles.   As we read in Acts 2, the outpouring (Revelation)  came upon the disciples and then many more Jewish believers in Yeshua.  But then this same Spirit was given to Gentile believers,  to the  surprise of Peter and the other Jewish believers in Jerusalem.     (Acts 10 v44) 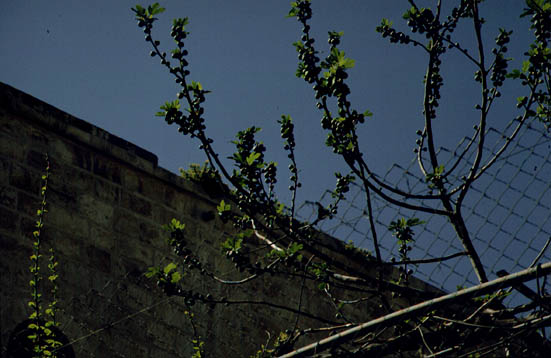 Mark 11 v12-14 and 20 tells of Jesus going into Jerusalem from Bethphage  (the name means House of Figs).   He went to a fig tree looking for some figs, although it was not the season for figs.  Finding none, he cursed the tree.   When they passed by next day the tree was dead.    What a strange story!

The fig trees in that area are strange in that they produce a small crop around Pessach like a promise of the harvest to come in due time.

The tree Jesus cursed had not produced its "firstfruits" and was obviously diseased and was never going to produce any fruit.   Jesus merely hastened its death as any farmer would do.

Jesus should be able to see the firstfruits of the fruit of the Spirit  (Galatians 5:22) in our lives and be able to look forward to the full harvest to come.  We are not yet perfect!

The fourth step -  Power to the believer -  The gift of the Holy Spirit.

The disciples received the Holy Spirit for salvation at the firstfruits day of Passover; when Jesus was raised - John 20:22

Having said this, he breathed on them and said to them, "Receive the Ruach HaKodesh! "

But they received Holy Spirit power to witness to others about Jesus at Shavuot - another firstfruits feast.