Jesus went throughout Galilee, teaching in their synagogues, preaching the good news of the kingdom, and healing every disease and sickness among the people. Matthew 4:23 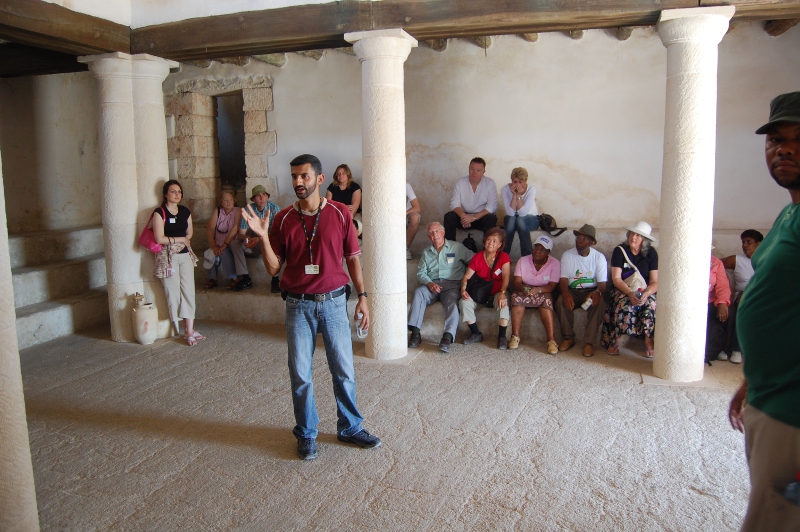 The gospels of the New testament record Jesus teaching / preaching in synagogues around Israel (Matthew 4:23, 6:2, 10:17 & 13:54), and Acts tells of Paul doing the same.
But where did synagogues come from and where did they fit into the system of the Jewish religion?

Jewish religious life, since the Exodus, as we read about it in the Hebrew scriptures (OT) centred on the Tabernacle and later the Temple in Jerusalem. Jewish people would go up to Jerusalem for the Moedim (appointed times) and for this reason they were known as the regalim (involving feet - walking - pilgrimage) But what about spiritual life in between the Moedim?

The name, "synagogue" is from a Greek word, meaning "assembly", and today, a synagogue will be referred to in Hebrew today as biet knesset - house of meeting. It seems synagogues were not mentioned in the Hebrew scriptures, to acquire a Hebrew name. Or maybe synagogue is just a word that stuck in the Greek in translation from Greek manuscripts.
Like the word "church" properly refers to people, not to buildings, so does "synagogue."
Indeed, it is likely that the workings of the early church were based on, or developed from the synagogue; since the early church was just a new strain of Jewish faith.

These assemblies or congregations probably started during the Babylonian exile.

Ezra 8:15 I assembled them by the river that runs to Ahava, and we camped there three days. I reviewed the people and the cohanim but found no L'vi'im there.

It is understood that synagogues were governed locally by a group of elders in a kind of democracy, and teaching or preaching could be given by suitable members of the community.
The synagogue would presumably have been then, as we know it later, a centre of Jewish life, including the school for Jewish children.

In the parcelling out of land by tribe, we learn that the Levites did not receive allocations like the other tribes (num 18:21), as God was their portion. But Levites were to live in various towns throughout the land.

Did they function as outreach workers from the Temple system?
Did they teach regularly in the synagogues?
The Bible does not tell us.

I felt ignorant not to know this and consulted Rabbi Mike Feuer, who teaches on Jewish history (the excellent audio series, The Jewish Story)

I have been looking for someone to ask this. I hope you don't mind me asking you. Reading the Christian Bible (Hebrew scriptures and New Testament) we see Jewish worship as being Temple based, but then in the first century there are synagogues too, and Jesus taught in them. Were there synagogues (biet knesset (?)) all along. And were they run by the cohenim that we read of living in the rest of the land; and not just Jerusalem?

Hi Michael -
As for your question about synagogues. Archaeologists have been pushing back the dates for the earliest synagogue for sometime. The mishna says that in the time of the 1st Temple the whole country was divided into 24 areas called ma'amadot. Each week one ma'amad would travel to Jerusalem to serve as the people's representative for the daily communal offering. They would pray and recite sections from Genesis. Even after the Temple was destroyed, some continued this practice in the synagogue, and this may have been its precursor.

So it seems that I was not alone in seeking to understand the origin of the synagogue.

A Visit to a Synagogue

The following photographs show some of the common features of a synagogue.

This synagogue resembles a free church chapel as it was once a Methodist church. 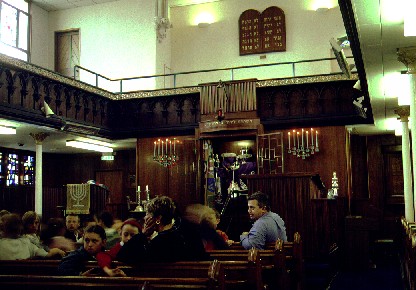 At the front there is no altar, but there is an Ark where the Torah scrolls are kept.

The decorations do not have representations of living creatures, only objects representing the 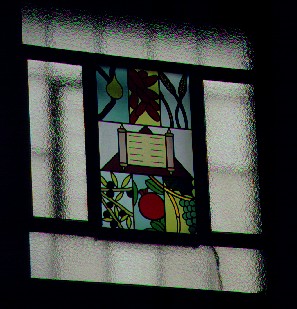 Notice the two tablets of the ten commandments. 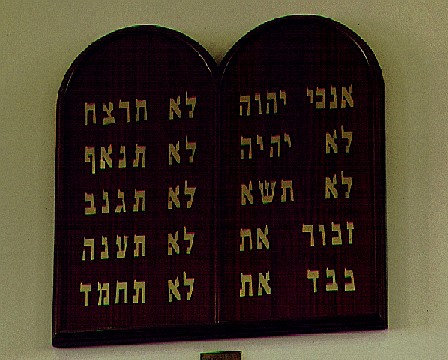 The lessons are read from the Bimah. 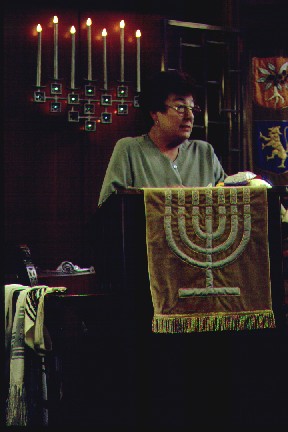 Above the Ark is a light called the Ner Tamid which always burns as a symbol of God's presence. It also represents the pillar of fire that guided the Jewish people on their early journey. 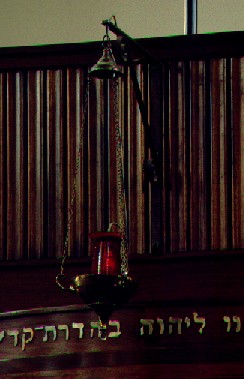 The Torah scrolls are kept in the Ark, behind a curtain that is decorated with the banners of the tribes of Israel. 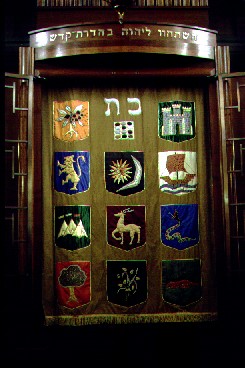 Behind the curtain are the Torah scrolls in their cases, or soft covers.  The scrolls are said to be "dressed". 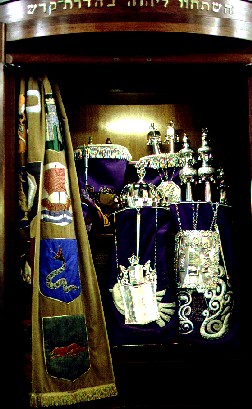 The scrolls are decorated with items that recall the role of the priests in the Temple. 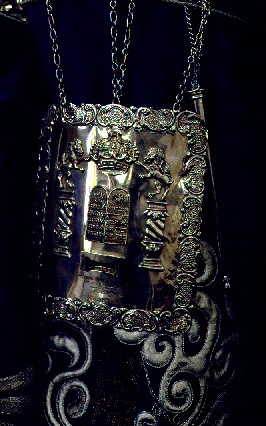 The Rimmonim.  (Rimmonim means pomegranates.  The high Priest's robe was trimmed with pomegranates and bells) 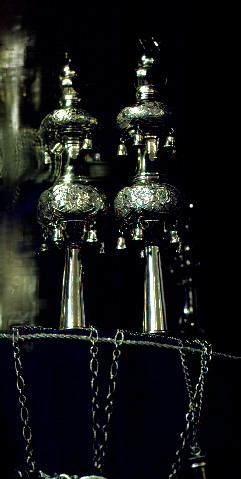 With thanks to our friends at the Reform Synagogue in Cardiff, for their warm welcome and informative tour.