Therefore go and make disciples of all nations, baptizing them in the name of the Father and of the Son and of the Holy Spirit, Matthew 28:19

God in three persons - The Trinity ? 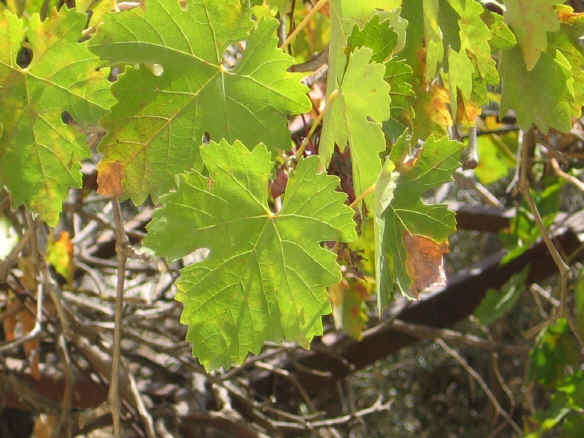 Vine leaves in Jerusalem - one leaf in three parts

Christians, along with Jews and Muslims hold that we are monotheists - we believe in one God. (But is that the same God ?

However, the Christian doctrine of the Trinity is a sticking point for Jews and Muslims who see Christians as having three gods.

Do we Christians really understand this doctrine? Should we hold on to this DOCTRINE? How should we discuss it with Jews?

How do we understand that our God is

- YEHOVAH the one and only God and creator while at the same time recognising that Jesus, God's anointed, his Messiah, is one with the Father, and that God's Holy Spirit is a person who deals with God's people?

Why should we expect to be able to understand the nature of our God who is the infinite creator of the universe and ourselves, his creation? We are created in his likeness, it's true, but so much smaller and so finite in our understanding.

At what point do we stop trying to understand the nature of God and putting God under the microscope, and start worshiping in trust beyond our understanding ?

Perhaps, if we can get our heads around the paradox without the crutch of a doctrine, we might be able to meet with Jews as well as understanding better ourslves.

What does the Bible really say ?

The oneness of God.

YEHOVAH is one - Deuteronomy 6 v4 sums it up . . . . In Hebrew this passage is referred to as the Shema "Sh'ma Yisrael, Adonai Eloheinu, Adonai echad"

This scripture is the heart of Jewish faith and Jews would, if able, utter this as their last words.

Some Christians say (and wildolive has quoted) that the word one - echad is a composite unity, like a husband and wife being one.  The word for a singular unity  ( yachid ) is not used here.

But Dr Nehemia Gordon, studying Deuteronomy 6:4 with Christians, pointed out that this makes no sense to Hebrew speaking Jews as echad means "one" and nothing more,

Also, the argument that "Elohim" is a plural (ending in "im" ) in Hebrew is not valid as, in this case the ending conveys magnitude; not plurality

Remember, the word LORD (All capital letters) used in English translations actually translates "my Lord" (Adonai) in Hebrew. This is what Jewish advisers told the Gentile translators was meant by "

" (Yod Heh Vav Heh) in the Hebrew text. That was because they would automatically say ADONAI (my Lord) whenever "

" appears in the text because "the name" was believed to be too holy to be uttered.

The use of capitals for LORD indicates denotes the use of the holy name, but Hebrew does not have capital letters.

In Genesis chapter 1 we have "Let us make man in our image, in our likeness"

"Then God said, "Let us make man in our image, in our likeness, and let them rule over the fish of the sea and the birds of the air, over the livestock, over all the earth,  and over all the creatures that move along the ground." So God created man in his own image,  in the image of God he created him;  male and female he created them."

was not a solitary being at Creation.

Gen 1:2 The earth was unformed and void, darkness was on the face of the deep, and the Spirit of God hovered over the surface of the water.

As a human being, I have a spirit, while still being one person.

The ambiguity of encounters with angels or God himself

In Genesis, and elsewhere, there are appearances of mysterious messengers from God who are more important than angels but are not God in the form of which he said to Moses, "  But," he said, "you cannot see my face, for no one may see me and live."  (Exodus 33 v20).   These appearances are called theophanies and are believed to be pre-incarnation appearances of Jesus.

Asher Intrater explored the identity of the mysterious man or angel or God himself in his book, "WHO ATE LUNCH WITH ABRAHAM?" - Recommended

Jesus / Yeshua was clear about his relationship with Avienu, our Father, in his dispute with the religious leaders, recorded in John 8 v54,    "Jesus replied,

"If I glorify myself, my glory means nothing. My Father, whom you claim as your God, is the one who glorifies me.   Though you do not know him, I know him. If I said I did not, I would be a liar like you, but I do know him and keep his word.   Your father Abraham rejoiced at the thought of seeing my day; he saw it and was glad."    "You are not yet fifty years old," the Jews said to him, "and you have seen Abraham!"    "I tell you the truth," Jesus answered, "before Abraham was born, I am!"   At this, they picked up stones to stone him,    "

I am" is the meaning of the most holy name of God (YHVH) which God revealed to Moses in Exodus 7 v13,  Moses said to God,

The big difference between Jews and Christians is, When the Messiah comes as son of David, to establish his Messianic rule over the world, will it be his first appearance, or his return having first come as Yeshua from Nazareth ?

Is the Jewish understanding of the Messiah that he will be a man or God himself ?

will go out and fight against those nations, fighting as on a day of battle. On that day his feet will stand on the Mount of Olives, which lies to the east of Yerushalayim; and the Mount of Olives will be split in half from east to west, to make a huge valley. Half of the mountain will move toward the north, and half of it toward the south.

Jesus' / Yeshua's relationship to God the Father is a source of difficulty for both Jews and Muslims.   However, it helps to remember that the term, "Son of God" in Hebrew means "having the essence of God" rather than the relationship we understand as the normal biological father - son relationship.  Perhaps we get into difficulty when we anthropormophose God into our likeness.

Jesus promised the Holy Spirit to his followers in John 14 v26,

All this I have spoken while still with you. But the Counselor, the Holy Spirit, whom the Father will send in my name, will teach you all things and will remind you of everything I have said to you.

It only confuses people if we speak of Jesus living in us - it is his Holy Spirit that lives in us.

The Holy Spirit is not mentioned, by name, in the Old Testament but "the Spirit of God" often is.  (see Genesis 1 v2 and note the capital letters of a proper name.)   The Ruach ha Kodesh   (Breath/wind the Holy) as a person appears in the writings of Medieval Jewish scholars.   Also, The Holy Spirit  appears as, "the finger of God" appears more than once.  It was the finger of God that inscribed the commandments on the two tablets of stone and it is the same finger of God that writes His law on our hearts.   (Exodus 31 v18 Deut 9 v10 and Jeremiah 31 v30-33)

The "Trinity" is not a New Testament word, but the grouping of the Godhead appears in "the great commission" Jesus gave his disciples in Matthew 28 v18.

"All authority in heaven and on earth has been given to me.  Therefore go and make disciples of all nations, baptizing (immersing)  them in  the name of the Father and of the Son and of the Holy Spirit, and teaching them to obey everything I have commanded you. And surely I am with you always, to the very end of the age."

The three persons in their roles are detailed in 1 Peter 1 v1-2 (CJB),

"To: God's chosen people . . . . . . chosen according to the foreknowledge of God the Father and set apart by the Spirit for obeying Yeshua the Messiah and for sprinkling with his blood."

Although we accept Jesus is one with the Father, we read that he was separated from God as he became sin for us on the cross.   Matthew 27,

About the ninth hour Jesus cried out in a loud voice, "Eloi, Eloi, lama sabachthani?"--which means, "My God, my God, why have you forsaken me?"

"Now we see but a poor reflection as in a mirror; then we shall see face to face. Now I know in part; then I shall know fully, even as I am fully known."

. . . The seven Messianic communities in the province of Asia: Grace and shalom to you from the One who is, who was and who is coming; from the sevenfold Spirit before his throne; and from Yeshua the Messiah, the faithful witness, the firstborn from the dead and the ruler of the earth's kings.

Note - "the One who is, who was and who is coming" is a reference to

as given to Moses.

What is the proper status of Mary?

We have considered why the Christian doctrine of the Trinity is a problem to Jews and Muslims because of their great concern to observe the first and second of the Ten Commandments,   (Exodus 20 v3 and 4).    The problems they experience may have more to do with Christian practice and its apparent similarity to pagan religions.   Many pagan religions have family deities, with father, mother and child gods.   Undue reverence for Mary, such as is evident in the multitude of pictures and statues on sale in the streets of Old Jerusalem. These must look pagan to pious Jews and Muslims.   How many think that the Christian Trinity includes Mary?

Mary, from all we know of her, was very humble about her position (See Luke chapter 1 where Mary was told of her role in God's gift of the Saviour.

v 28 The angel went to her and said, "Greetings, you who are highly favored! The Lord is with you."

46And Mary said:    My soul glorifies the Lord  and my spirit rejoices in God my Savior,  for he has been mindful  of the humble state of his servant.  From now on all generations will call me blessed,   for the Mighty One has done great things for me--  holy is his name.    His mercy extends to those who fear him,  from generation to generation.  He has performed mighty deeds with his arm;  he has scattered those who are proud in their inmost thoughts.  He has brought down rulers from their thrones   but has lifted up the humble.  He has filled the hungry with good things   but has sent the rich away empty.  He has helped his servant Israel,  remembering to be merciful  to Abraham and his descendants forever,  even as he said to our fathers."

Mary was indeed highly favoured and we would call her blessed by God, but she rejoiced in her position as the Lord's servant and was not elevated to deity.