And the LORD God made all kinds of trees grow out of the ground--trees that were pleasing to the eye and good for food. Genesis 2:9

Tu B'Shvat or the New Year of the Trees 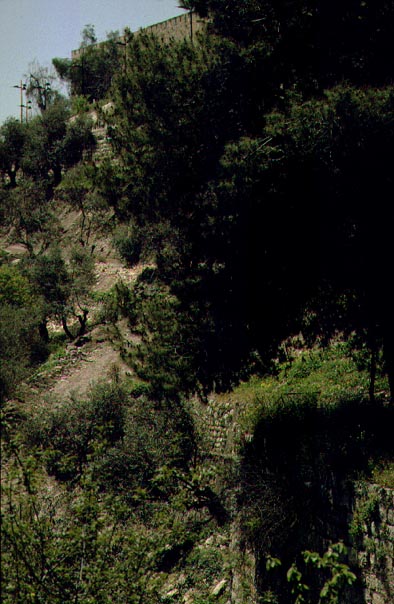 Tu B'Shvat is literally  the 15th of Shvat; the date of the holiday.

Tu B'Shvat is the New Year of the Trees, and involves planting trees and celebrating their importance.  It is celebrated when the almond trees blossom in Israel.

Tu B'Shvat is the date used to calculate the age of trees for tithing. (See Lev. 19:23-25), fruit from trees may not be eaten during the first three years; the fourth year's fruit is for God, and after that, the fruit may be eaten.

Tu B'Shvat is technically the day when trees stop absorbing water from the ground, and instead draw nourishment from their sap.

In Tel Aviv, early in the morning, there is a blare of trumpets summoning schoolchildren to come out and plant trees.   Older children, dressed as priests, make speeches about the festival.   After planting trees,  the children hold hands, dance around the trees and sing the National Anthem. 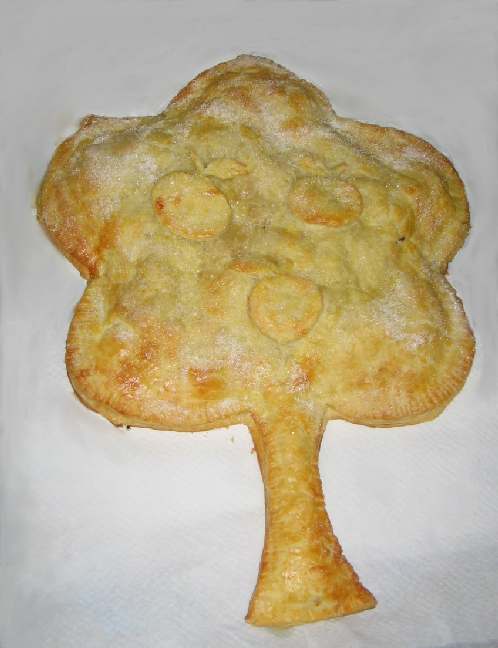 In European Jewish traditions, a tree planted at Tu B'Shvat for a baby was used to make the Chuppah for their wedding.

A special apple pie, in the shape of a tree is served to celebrate Tu B'Shvat.

Several trees occur in scripture and have spiritual significance.

( Prunus Dulcis)  is cultivated in the warm climate of  SE Europe and SW Asia for its nuts.  In Israel it is the first tree to blossom and the last to be harvested, so it spans the whole agricultural year.   Almond blossoms are prominent in the ornamentation of the Menorah.    When Aaron's staff (representing the house of Levi)  budded, it produced almond flowers and almonds. (Numbers 17)  This staff was a sign to the grumblers that God had chosen Aaron and the house of Levi as His priests, causing awe among the people.  The staff was then kept in front of the Ark.

The Hebrew for an almond branch is Sho'ked, which  God used in a play on words, when he commissioned Jeremiah, saying he was "watching over" (Shaked) Israel to see his purposes fulfilled.   (Jer 1 v11-12)

The reference to almonds blossoming in Ecclesiastes 12 may refer to the beginning of spring (but in old age desire is still not stirred) or the pale blossom may be a picture of old age.

(Ficus) is very tough and can grow in the most barren, rocky ground.  It produces fruit which is sweet but quickly goes rotten if left too long.  The fig tree only lives for fifty years.  This can be taken as a picture of the first fifty years of the state of Israel.  It was a miraculous event after so long, but Israel shares many wrongs with all the other nations of the earth.  God's spiritual revival is yet to come.  The fig tree is also unusual for its "firstfruits"   ( See sha vu ot which explains the fig tree which Jesus cursed)

(Olea europaea - cultivated and olea  europaea sylvestris - the wild variety  -  see also The Wild Olive)  takes fifty years to establish itself, but then its fruit can be crushed to produce olive oil.  Olive oil was used to fuel the Temple lamp stand  ( Menorah ) and for anointing.   The Olive tree tends to be used as a picture of Israel, in its function of giving light to the world;  as in the two olive trees giving golden oil to the Menorah in the vision of Zechariah. 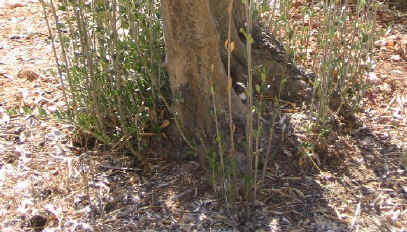 The olive tree reproduces by sending up shoots from its roots.   If not trimmed they surround the trunk, like the psalmist's blessing of many children;  "your children will be like olive shoots around your table.  ( Psalm 128 v3)

The olive shoot is probably also the source of the picture of Messiah as,  "There shall come forth a shoot from the stump of Jesse and a branch shall grow out of his roots."   (Isaiah 11 v11)   When Matthew commented that the prophets had said of Messiah that,  "He shall be called a Nazarene"   (Matt 2 v23) he was  probably thinking of  Isaiah 11 and Jeremiah 33 v15 and the fact that the name Nazareth  (Natseret)  comes from natser  -  which means branch or shoot.

It is interesting to note that the Hebrew term for a Christian is a Notsri (Nazarene).

The olive tree is incredibly tough - trees which were left bare rooted in the Jerusalem sun before being planted survived quite happily.

The cultivated olive tree came from the wild olive tree  (Olea europaea var. sylvestris) which grows around the Mediterranean.

(Phoenix dactylifera) has incredibly deep roots, going down to find nourishment.   Its significance in the Bible is with rejoicing in God.   The believer may rejoice in the nourishment he receives from being deeply rooted in our God.  Remember the palm branches strewn in front of Yeshua as he entered Jerusalem.  Palm, lulav, branches are one of the four species used at Sukkot, the Feast of Tabernacles.

(Myrtus communis)  appears in Zechariah  ch 1 v7-8 (from David Baron's book)   The Myrtle is Generally taken as symbol of Israel.   God's chosen people is not represented by the proud Cedar or the lofty, far spreading Oak – symbols of great world powers,  but by the lowly, fragrant Myrtle growing in the shady valley out of the world’s gaze.   Yes it is with the lowly, with those of a contrite and humble spirit that the Lord associates.    Remember the Myrtle is one of the four species of Sukot.  Esther's Hebrew name was Hadassah, meaning Myrtle.

Four trees are featured in the celebration of Tabernacles.    ( see Sukot)

F. Nigel Hepper's book  "Planting a Bible Garden" contains interesting information on Trees and plants that are mentioned in the Bible.     see Books

The Promised Land that the children of Israel entered did not look as it does today but was extensively wooded.

"The battle spread out over the whole countryside, and the forest claimed more lives that day than the sword"    (2 Samuel 18 v8)

It used to be the practice of invading armies to cut down and burn all crops, forests, orchards etc.   Israel suffered much from this.  (The armies of Israel were forbidden to do this. -   Deuteronomy 20 v19)

But the words of the prophets are being fulfilled,  Isaiah ch35 v1 and Ezekiel 36 v8.

The wilderness and the wasteland shall be glad for them, and the desert shall rejoice and blossom as the rose.",

"But you O mountains of Israel, you shall shoot forth your branches and yield your fruit to My people Israel, for they are about to come."

The Zionist pioneers started a process of re-forestation. In the beginning of the 1900s, the native forests were almost non-existent, due to centuries of neglect warfare, grazing and logging, not to mention the tax on trees levied under the Ottoman Empire.

When Israel declared independence, there were fewer than five million trees in the entire expanse of the country. KKL alone has planted 230 million trees, and the total is probably around 300 million. (as of 2007) A programme of reintroducing wild animals has also been undertaken.

This work suffered a setback in the 2006 war with Hizb'allah. More than 3,000 acres of planted forests and natural woodland containing over 750,000 trees, were damaged during the fighting in the north. Most of the damage was in the Naftali mountain range, where three-quarters of the total forested area, was burned. 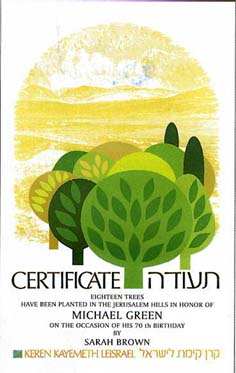 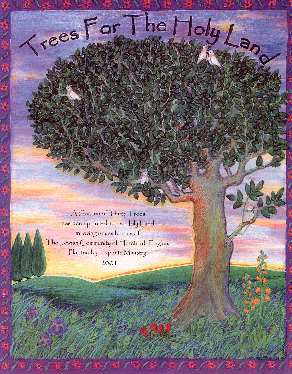 Israel is busy planting thousands of trees as part of the process of restoring the land from its barren state of 1948.

Anyone can have trees planted on their behalf, or you can go and plant a tree yourself.

The International Christian Embassy in Jerusalem supports this work and planted 50,000 trees on Mount Deborah in Galilee.   At the time of writing, yhey were working on another 50,000 tree forest near Jerusalem.

For $10 per tree you can plant trees or have them planted for you.

Keren Keyemeth LeIsrael  ( Jewish National Fund) will do the same and also give certificates and dedications for an extra $2.  kkl  - E-Mail plantatree@kkl.org.il

This certificate is for the garden of thirty trees planted in remembrance of Hereford England's medieval Jewish community.

Man likened to trees in scripture