There I will enter into judgment against them concerning my inheritance, my people Israel, for they scattered my people among the nations and divided up my land. Joel 3:2

The Two State - One State Solution?

Israel's coastal strip, seen from Alfe Menasheh (Would be part of a Palestinian state if the Green Line determined the border)

There has already been a two state solution.

It carved the British Mandate of Palestine into a Jewish state of Israel  and an Arab state of Transjordan. See Land

But now, he world is looking hopefully at the "Roadmap" / "Oslo" path to peace which will split Israel into a Jewish state and an Arab (Islamic) state.

Worryingly, both Israel and the United States have already declared agreement with a two-state solution to the Israeli/Palestinian conflict.

How did this belief in the two state solution come about?

An excellent study of the evolution of the Two State proposition has been done by Caroline Glick and forms part one of her new book THE ISRAELI SOLUTION.

Neither ISRAEL nor the U.S.A. officially opposes a Palestinian state. What they do oppose is an independent, unilateral declaration of such a state that completely ignores any of Israel’s concerns.

Let’s get this straight. The Palestinians refuse to recognize Israel as a Jewish state. Yet, they want to be and are asking to be recognized as a Palestinian state. (Rev Jim Hutchens)

Such a solution does not fit with the understanding of a Bible believing Jew or Christian ( see Land ) but the situation on the ground is not that simple.  ( see also Biblical Christian Zionism )

The following perspective on two states comes from a feature by Ari and Shira Sorko-Ram.

The majority of Israelis have resigned themselves to a Palestinian state because of political and demographic features of the area.

Israel is a democratic state of five million Jews and one million Israeli Arabs.  All Israeli citizens have equal democratic rights.  The Palestinian population of Gaza and the "West Bank" is 3.4 million , and is rising at the highest rate in the world.  This contrasts to a generally western approach to having children among the less religious Jews of Israel and the unwillingness of the Jews still living in more comfortable nations to make aliyah.

If Israel were to integrate these 3.4 million Arabs/Muslims and give them the vote, Israel would almost immediately become an Islamic state.  The Palestinian leadership is not seeking to annihilate Israel only by military methods; using Israel's democracy against it would be equally acceptable.  This is the reason why Arafat was so insistent in pursuing his spurious claim of the "Right of Return" of seven million Palestinians who are claimed to be descendants of refugees from Israel.

The whole issue of Palestinian Refugees and the "Refugee Camps" is an important and emotive issue.  For some facts on refugees, visit www.jewishvirtuallibrary.org /refugees

Before continuing, we should rebalance the argument by considering the Jewish Refugees

Israel remaining a Jewish state means the Palestinians abandoning their claim of a "Right of Return".

One would not pick this up from media accounts, but Bush and Blair had three principles for this Palestinian state.

Democracy will be incredibly difficult to achieve, even if one assumes the people want it.

Palestinian negotiators have a record of not accepting anything less than their full demands.     See also Quotes for an insight into Palestinian policy. 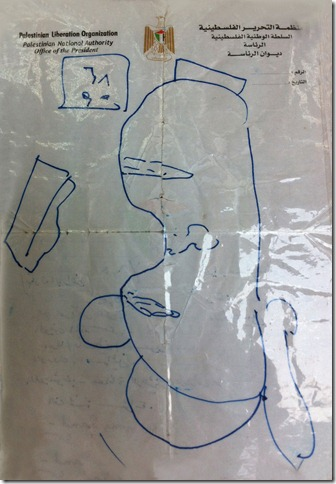 This map, hand-drawn by Abu Mazen (Mahmoud Abbas) shows the land offered by then PM Ehud Olmert. published in 2013.

According to the map, confirmed by Olmert himself to be close to accurate, the surrender was not only of Judea & Samaria and more, but of Temple Mount as well, the holiest Jewish spot in the universe.

Yet Abbas rejected the deal offered by Olmert.

“The Al-mighty shall perform a miracle that the Arabs will not want to accept anything.”

Since then the miracle has been repeated a number of times.

President Bush said to the Palestinians,  "If you want to be helped, here's what we're willing to do.  If you choose not to be helped, if you decide you don't want a free, democratic society, there's nothing we can do."

The two state solution may be the only solution which man can produce, but it is not what the Bible foresees; except perhaps as a solution which the Antichrist manages to implement.  The western world might be pleased to buy a peace with Islamic terrorists by giving away Israel's land, but judgment for dividing God's land must surely follow.

The Options Two State - One State

The latest version of the Arab League plan, instead of insisting that Israel withdraw completely from all lands conquered in 1967, now opens the door to minor land swaps. Israeli settlement blocs right across the 1967 line presumably could remain in Israel.

Arab leaders always have conditioned their peace offers on a take-it-or-leave-it basis.

The totally unacceptable part of the Arab plan, that would doom Israel, calls for a "right of return" to Israel of millions of Palestinian refugees and their descendants. Israel would
be swamped and eliminated as a Jewish state.

The Arab plan would create two states -- both Arab.

Prime Minister Benjamin Netanyahu reiterated his willingness to enter direct peace talks with the Palestinian Authority, saying that the key to an agreement is Palestinian acceptance of the Jewish State.

Netanyahu did not directly address an Arab League announcement earlier this week, brokered by Kerry, which endorsed mutual land swaps to help delineate the final borders in a comprehensive
peace deal.
Netanyahu outlined the importance of a peace deal, saying “The purpose of the future agreement with the Palestinians is to prevent the eventuality of a bi-national state. (see below)

He stressed – that the core of Israel's conflict with the Palestinians is not territory, but a
Palestinian unwillingness to recognize Israel's legitimacy within any boundaries.

But there is a problem, not often mentioned, it is the requirement (under UN Resolution 242) that Israel has Defensible Borders. This is not easily achieved, as the video demonstrates.

Government of Gaza – Hamas - Never! Not under any circumstances!
Palestinian Authority (Fatah) Maybe - as a step towards single state of Palestine. (the Two Step Solution)

See the charters of both Hamas (Gaza) and Fatah (West Bank)

Arab View of a state of Palestine 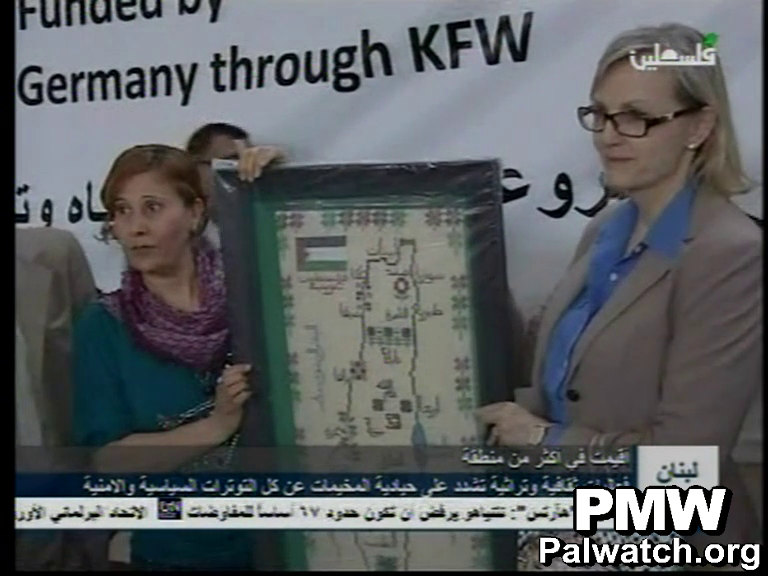 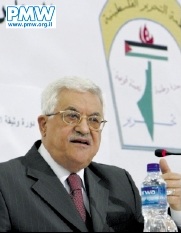 After a pause for the world to get used to the status quo, violence will resume until Stage 2 is achieved.

The picture below was taken from Alfe Menasheh, behind the "Green Line" - most likely part of a Two State solution Palestine. Tel Aviv skyline can be clearly seen with the sea sparkling beyond it. Israel's international airport is inland from Tel Aviv.

Around 70% of Israel's population and economy can be seen (and attacked) from this point. Israel could be brought to its knees with rocket fire from here! Israel's North-South artreries run through a corridor that would be 14 miles wide at its narrowest.

An Arab state of Palestine "From the River to the Sea" - Look. No Jews!

"a Palestinian state in the 1967 borders, with Jerusalem as its capital, is just a phase,"

In an interview with the Ma’an news agency on January 19, Tawfik Tirawi, a member of the Fatah Central Committee, said “Palestine stretches from the river to the sea… a Palestinian state in the 1967 borders, with Jerusalem as its capital, is just a phase, as far as I am concerned.”

Tirawi said that he would gladly accept a state along the 1967 borders as a first step, but warned: “Don’t think that there can be a solution to the Palestinian issue by establishing a state the borders of which are limited to the West Bank and Gaza. I challenge any Palestinian to say that the map of Palestine is limited to the West Bank and Gaza.”

He quickly added, “This does not mean that I want to throw the Jews into the sea. No, I want to live together with them… We want the people who are in Palestine to live in Palestine in its historical borders.”

Earlier this month, Tirawi told Palestinian TV that Adolf Hitler “was not morally corrupt, he was daring.”

(Not Gaza?, because it became a de facto Palestinian state when Israel unilaterally withdrew)

Would any Arab leader accept the idea?

Israel is a democracy

Israeli Arabs have equal rights but still tend to side with Arab criticism of Israel.

The World accuses Israel of being an Apartheid state now, because of restrictions on non-Israeli
Arabs.

The accusations against an Israel that is trying to continue as a Jewish state with a large Arab / Muslim population would be impossible to resist. (even though there are many Muslim states that are Judenrein – and Palestine will be one such)

If, at some stage, an increased Arab population all voted, in Israel's free and fair elections, that Israel become an Islamic State with Sharia law and possibly even a Judenrein state such as Mahmoud Abbas hopes for, that would the end of Israel and Israel's Jews.

The end of the world's only Jewish state! 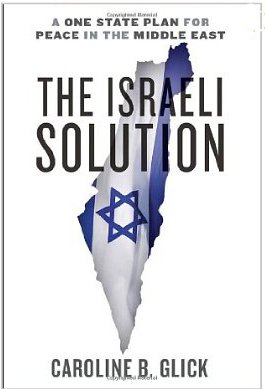 This book is an excellent overview (maybe the best) of the whole history of Palestinian efforts to destroy Israel by any means they can find.

A manifesto that exposes the flaws in the two-state policy of the United States toward Israel and the Palestinians and offers a direct and powerful call for Israeli sovereignty in the region.

The reigning consensus in elite and academic circles is that the United States must seek to resolve the Palestinians’ conflict with Israel by implementing the so-called two-state solution. Establishing a Palestinian state, so the thinking goes, would be a panacea for all the region’s ills.

She knows what she is talking about - From 1994-1996, as an IDF captain, she served as Coordinator of Negotiations with the PLO in the office of the Coordinator of Government Activities in Judea, Samaria and Gaza. In this capacity she was a core member of Israel’s negotiating team with the Palestinians.

In 1997 and 1998 she served as assistant foreign policy advisor Binyamin Netayahu during his first stint as Prime Minister.

The west throws Israel to the wolves and Palestine is Arab, Islamic, Judenrein "from the river to the sea" - no more war (apart from Muslim on Muslim killings) - Middle East Peace - the world is happy. ?

Islamic terrorism will not cease around the world. 2013 terror attacks in Boston and London, Woolwich had nothing to do with Israel and "Palestine".

Killing in and around Palestine will not cease.

More Muslims are killed by fellow Muslims than by anybody else, so this solution too is an illusion. Sunni, Shia, Alawites, Fatah and Hammas will continue slaughtering each other. See Syria - more than & 470,000 dead. ( UN )

The only stable (?) solution

Continue talking about talks while the Palestinians continue saying "NO"

The Nations will eventually tire of the intractability of the "Middle East problem" that they see as being Israel's fault, and of Islamic terror in their own lands that they blame on Muslim anger about "Palestine".

Then they impose a solution on Israel. A United Nations Force will invade Jerusalem as prophecied . Zechariah 12 to 14.

my God will come to you with all the holy ones.

will be king over the whole world. On that day