If I was asked to give a word on Israel I think that word would be "Until".

When God says "until" it is very important. 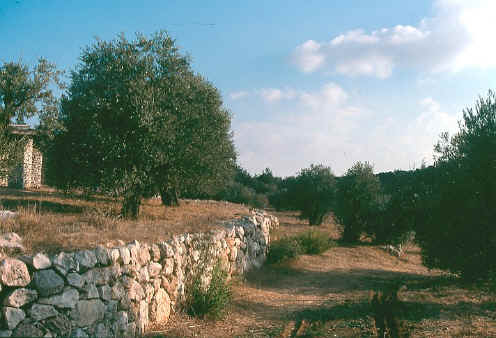 When you find "Until" in your Bible, it refers to a certain situation or mode of action that prevailed at the time, or prevails now, but will not continue to prevail beyond a certain time. When God’s word speaks of "until", He clearly plans to change the pattern of events.

When we see an "Until" we need to see if the condition has already been passed, and if it has not, to examine the "until what" condition and what happens after it is reached.

We see the tiny nation of Israel battered by enemies all around and deserted by friendly nations around the world. We see the Jews as people who once had the glory of God’s election but now lag behind while the Church has taken over God’s ministry to the world. But what we see is not what God sees. What we see now is not what will be after the remaining "Untils" have happened. Which of the "Untils" about Israel and the Jews are still awaiting completion? They are about the end of the "End Times.

In the wild olive chapter, Romans 11 and verse 25 it says,

"It is that stoniness , to a degree, has come upon Israel, until the Gentile world enters it fullness; and that it is in this way that all Israel will be saved." The situation of Israel is only temporary, and is for our benefit. Not only that, but "if Israel’s being placed temporarily in a condition less favoured than the Gentiles is bringing riches to the latter – how much greater riches will Israel in its fullness bring them!"

In this chapter, Paul considers one of the most difficult mysteries of God; how and why God made it difficult for Jews to find his salvation through Yeshua. The Ideas of Jews being hardened or blinded is unacceptable to Jewish-Christian dialogue, but it is in the Bible! We need to bear this in mind before witnessing at Jews and becoming frustrated by their response. See also Mission Israel? Where are we in relation to this "Until"?

Don Finto (see Israel and the Nations) points out that the restoration of Israel to the Promised Land coincided with spiritual advances in the Gentile church. We are actually moving past the above "Until".

Jesus also used "Until" referring to the Gentiles, when he was answering the disciples’ question about, "when will these events take place?" He said,

"Some will fall by the edge of the sword, others will be carried into all the countries of the Goyim, and Jerusalem will be trampled down by the Goyim (Gentiles) until the age (times) of the Gentiles has run its course." (Luke 21 v24 CJB with added words in brackets)

Not many believed, a couple of hundred years ago, that Israel would return to her land. Yet the prophecies of return were fulfilled in 1948; although Jerusalem continued to be trampled by Gentiles. In 1967, Jerusalem, including the Temple Mount was recaptured for the Jews. It would appear that the age of the Gentiles has ended, or is ending.

"O Jerusalem, Jerusalem, you who kill the prophets and stone those sent to you, how often I have longed to gather your children together, as a hen gathers her chicks under her wings, but you were not willing. Look, your house is left to you desolate. For I tell you, you will not see me again until you say, `Blessed is he who comes in the name of the Lord.'"

Jesus/Yeshua does indeed come in the name of the LORD, since Yeshua means "YHVH is salvation" ( see Names) So here we have another prophecy of desolation with an "Until" condition. That end condition is the people of Jerusalem calling Yeshua to return. Indeed we know that many Jewish people are now saying, "Blessed is he who comes in the name of the Lord" / "Baruch haba b’shem Adonai" – meaning Yeshua the Messiah.

Further back, Isaiah was given some "Untils". We often study Isaiah 6 from verse 1 to verse 8 ("here am I, send me") We do not give as much heed to subsequent verses where the message Isaiah was sent with is spelled out, causing the prophet to ask, "Adonai,how long?" The message was about the people’s hearts being hardened and the land being utterly wasted. God said,

"......"Go and tell this people: " `Be ever hearing, but never understanding; be ever seeing, but never perceiving.' Make the heart of this people calloused; make their ears dull and close their eyes.
Otherwise they might see with their eyes, hear with their ears, understand with their hearts, and turn and be healed."
Then I said, "For how long, O Lord?" And he answered: "Until the cities lie ruined and without inhabitant, until the houses are left deserted and the fields ruined and ravaged, until the LORD has sent everyone far away and the land is utterly forsaken. And though a tenth remains in the land, it will again be laid waste. But as the terebinth and oak leave stumps when they are cut down, so the holy seed will be the stump in the land."

All these things have happened, and we have passed the "Until" condition. The Jews are back in the land and it has been rebuilt. The re-unification of Jeruslalem in 1967 coincided with the emergence of the Messianic Jewish "church". Remember God's promise was to bring His people back and then to purify them; not the other way around. Some folk are wondering when the removal of the hardness of the Jews, which Paul talks of in Romans 11, will occur.

v25 I do not want you to be ignorant of this mystery, brothers, so that you may not be conceited: Israel has experienced a hardening in part until the full number of the Gentiles has come in. And so all Israel will be saved, as it is written:

(CJB) For, brothers, I want you to understand this truth which God formerly concealed but has now revealed, so that you won't imagine you know more than you actually do. It is that stoniness, to a degree, has come upon Isra'el, until the Gentile world enters in its fullness;

(Note the difference in the CJB - not the full number of Gentiles but Gentile world coming to fullness - in the fruit of the Spirit?)

"For if their casting Yeshua aside means reconciliation for the world, what will their accepting him mean? It will be life from the dead!"

And what is "life from the dead" but Revival?

Or consider another "Until" in Acts 3 v19, concerning the return of Jesus the Messiah.

Repent, then, and turn to God, so that your sins may be wiped out, that times of refreshing may come from the Lord, and that he may send the Christ, who has been appointed for you--even Jesus. He must remain in heaven until the time comes for God to restore everything, as he promised long ago through his holy prophets.

Even further back we find what Leo Giovanetti described as the Mother of All Promises, Genesis 28 v13 to 15.

"I am ADONAI, the God of Avraham your [grand]father and the God of Yitz'chak. The land on which you are lying I will give to you and your descendants. Your descendants will be as numerous as the grains of dust on the earth. You will expand to the west and the east, to the north and the south. By you and your descendants all the families of the earth will be blessed. Look, I am with you. I will guard you wherever you go, and I will bring you back into this land, because I won't leave you until I have done what I promised you."

In this promise, we find the first declaration of ADONAI/the LORD/YHVH that He will bless all the nations through Jacob (Israel), to whom this promise was addressed . Notice that "this land" is the sign of this promise. God has not given up on Israel; therefore I can be confident that he will not give up on me!

Church, we need to remember that these "Untils" are all tied up with Israel! That is where we must be watching and waiting.

I have posted watchmen on your walls, O Jerusalem; they will never be silent day or night. You who call on the LORD, give yourselves no rest, and give him no rest till he establishes Jerusalem and makes her the praise of the earth.

For as often as you eat this bread and drink the cup, you proclaim the death of the Lord, until he comes."

"I tell you, I will not drink this 'fruit of the vine' again until the day I drink new wine with you in my Father's Kingdom."