Then the LORD God made a woman from the rib he had taken out of the man, and he brought her to the man. Genesis 2 v22

Wedding customs in Jesus' day and today   -    The Bride of Christ

We know that the ceremony is held with the couple and the rabbi under a canopy or chuppah / Huppah, and that the groom crushes a glass under his foot at the end.  We also know that Jesus attended weddings and used them in some of his parables.   What meaning do they have for us?  Since Jesus uses the picture of a bride for  his redeemed church, we can read about weddings in terms of his promises to us. 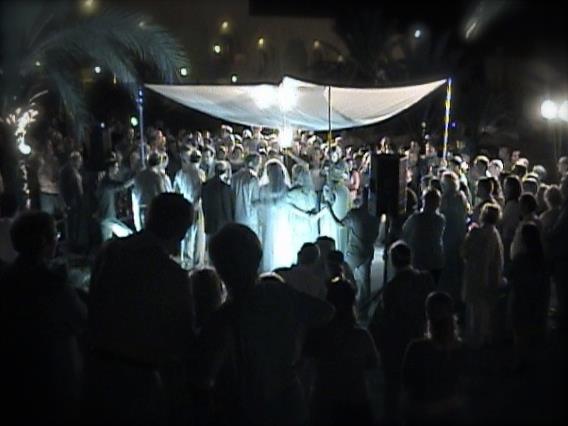 "Here Comes the Bride" by Richard Booker is very helpful and points out how Jewish wedding customs are significant for the Christian in the same way as the other feasts of Israel. Much of the following comes from this book.  See Internet.

The ancient practice of taking a wife was just that. A man would take his chosen woman home, have sexual intercourse with her and she would be his wife. Details such as the willingness of the woman or her parents are not clear.   GOD had better plans and gave guidance on these matters in the Torah. His people used GOD'S principles to develop an honourable way of doing things. The Jewish practice is what Jesus referred to a number of times so it merits investigation.

The betrothal was binding and could only be undone by a divorce with proper grounds, such as the bride being found not to be a virgin, (see Joseph and Mary - Matt 1 v18-19 ) The young man prepared a Ketubah, or marriage contract (or covenant) which he presented to the intended bride and her father.   Included in this was the " Bride Price ", which was appropriate in that society to compensate the young woman's parents for the cost of raising her, as well as being an expression of his love for her.

To see if the proposal was accepted, the young man would pour a cup of wine for his beloved and wait to see if she drank it.   This cup represents a blood covenant. If she drank the cup she would have accepted the proposal and they would be betrothed. The young man would then give gifts to his beloved, and then take his leave.   The young woman would have to wait for him to return and collect her.

The wedding chamber and the Chuppah

Before leaving the young man would announce, " I am going to prepare a place for you ", and  "I will return for you when it is ready".   The usual practice was for the young man to return to his father's house and build a honeymoon room there.   This is what is symbolized by the chuppah or canopy that is characteristic of Jewish weddings.   He was not allowed to skimp on the work and had to get  his father's approval before he could consider it ready for his bride.   If asked the date of his wedding he would have to reply, "Only my father knows."

Meanwhile the bride would be making herself ready so that she would be pure and beautiful for her bridegroom.   During this time she would wear a veil when she went, out to show she was spoken for (she has been bought with a price)

When the wedding chamber was ready the bridegroom could collect his bride.   He could do this at any time so the bride would make special arrangements.   It was the custom for a bride to keep a lamp, her veil and her other things beside her bed.   Her bridesmaids were also waiting and had to have oil ready for their lamps.

When the groom and his friends got close to the bride's house they would give a shout and blow a shofar to let her know to be ready.

When the wedding party arrived at father's house the newly weds went into the wedding chamber for a seven day honeymoon and the groom's best friend stood outside waiting for the groom to tell him that the marriage had been consummated.  The proof of this was the bed-sheet bearing the blood shed by the bride as a result of her first sexual intercourse.   This is notable for two reasons.  It speaks of purity before marriage, but it also shows a blood covenant (the most solemn and binding kind) such as God's covenant with his people.

Then all the friends really started celebrating for the seven days that the couple were honeymooning.   When the couple emerged there would be much congratulation and the Marriage Supper could begin.

The Significance of this for us ?

GOD offered Israel a formal, written marriage contract - the Torah. See especially Ex 20 v3 and Deut 6 v4-5.   The contract was a blood covenant ( bride price ) in the blood of the Passover lamb, when GOD took Israel out of Egypt to be his own.   (Ex12 v13-14)   Israel accepted this proposal, saying "All that the LORD has spoken we will do."  (Ex19v7-8)   The people drink a cup of wine at Passover for acceptance of GOD'S proposal.   GOD gave Israel the Sabbath to spend time with him (like the wedding chamber ) and gave the three pilgrimage feasts as wedding celebrations.

JESUS and the Church

Jesus came to his own, (as a Jew called Yeshua meaning YeHoVaH is Salvation ) to Eretz Israel (the land of Israel) to present his marriage contract.   See John's comments refering to weddings John 3 v28-29.   John introduced Jesus as the Lamb of God and we know that he gave his own blood as the bride price for all who would accept him ( both Jew and Gentile ) Is 53 v4-6, Matt 26 v26-28.

After he rose again Jesus spent forty days with his new church and made another wedding reference, about going to prepare a place. John 14 v2-3

Concerning things yet to come Jesus used wedding pictures again.   See Revelation 21 for reference to the Lamb's wife and the new Jerusalem, prepared as a bride.   He said that "only the FATHER knows" the time when he will come for his bride and he used this idea in his parable of the ten virgins Matt 25.   Understanding wedding practice also throws light on references to "The marriage feast of the Lamb" Rev 19 v9, and making ourselves ready 1 Pet 4 v10, Rev 19 v7-8.

On the Shabbat before the wedding, the groom will have read a portion during the service and been showered with sweets, nuts and raisins, wishing the couple a sweet life.

The bride will have been to the Mikveh on the previous day.  ( see Baptism & the Mikveh )  Both will fast before the ceremony.

The ceremony can be any day other than Shabbat or a holy day.

You are blessed, Lord our G-d, the sovereign of the universe, the creator of the fruit of the vine.

Bride and groom both drink

The groom gives the bride a ring, saying,   " With this ring you are sanctified to me according to the Law of Moses."

The ring is placed on the first finger of the right hand.

The Ketubah  ( Marriage contract ) is read and signed.  It is a statement of the husband's intention to provide for his wife.   (the Ketubah may be elaborately decorated)

The Seven Blessings (Brachot) are recited

You are blessed, Lord our G-d, the sovereign of the world, who created everything for his glory.

You are blessed, Lord our G-d, the sovereign of the world, the creator of man.

Let the loving couple be very happy, just as You made Your creation happy in the garden of Eden, so long ago.  You are blessed, Lord, who makes the bridegroom and the bride happy.

You are blessed, Lord our G-d, the sovereign of the world, who created joy and celebration, bridegroom and bride, rejoicing, jubilation, pleasure and delight, love and brotherhood, peace and friendship.  May there soon be heard, Lord our G-d, in the cities of Judea and in the streets of Jerusalem, the sound of joy and the sound of celebration, the voice of a bridegroom and the voice of a bride, the happy shouting of bridegrooms from their weddings and of young men from their feasts of song.  You are blessed, Lord, who makes the bridegroom and the bride rejoice together.

You are blessed, Lord our G-d, the sovereign of the world, creator of the fruit of the vine.

Following these blessings , the bride and groom again drink from the cup of wine and a glass is broken underfoot by the bridegroom.

Husband and wife have some time together to relax and break their fast.

In traditional communities there will be a wedding feast every night for seven nights, with the couple as honoured guests of different people.  The seven blessings said under the chuppah are repeated.

( See www.ou.org/wedding/7brachot.htm for the blessings complete with transliterations of the Hebrew)

And the crushed glass?     It depicts the destruction of the second temple which they remember with sadness amid all the joy and celebration.