"Immediately after the tribulation of those days shall the sun be darkened, and the moon shall not give her light, and the stars shall fall from heaven, and the powers of the heavens shall be shaken:" Jesus : Matthew 24:29

Notice that "The Tribulation" with capital letters does not appear in the bible, and that in most cases it appears without the definite article and without the capital T, as "tribulation." "The Tribulation" is the name given by theologians to a major end times event; very often in conjunction with another contentious topic, "The Rapture.". 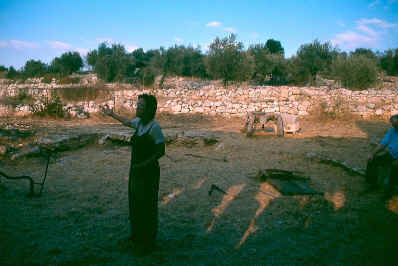 Thlipis can also be translated, anguish, affliction, sufferings, persecution, trouble, hardship, distress or opposition.   The word appears fifty times in the writings of the apostles.

Check out Tribulation (KJV in a concordance such as (E-Sword) Notice that most occurrences of tribulation are about the persecution of believers. 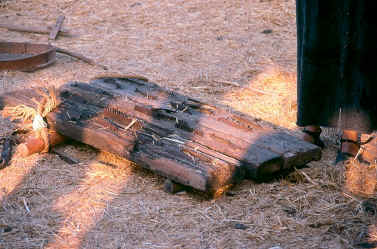 The word thlipis is connected with the threshing sledge.

The object towards the right of the threshing floor (picture above)  is a threshing sledge.  A man would stand on it, holding a rope handle and driving the animal that was harnessed to it.

The underside (pictured right) was fitted with iron teeth which separated the grain from the stalks and husks of the corn as it was driven over it.

Babylon was the place of suffering for God's people of Israel/Judah in their time of Exile, (Psalm 137   "by the rivers of Babylon . . . where we wept when we remembered Zion",  so there are applications of prophecy to the coming tribulation.   These disasters were to befall a nation that had fallen so far from the faith and righteousness it once had, but which dwelt secure, comfortable and complacent in material wealth.   The concept of Tribulation in prophecy is linked with Babylon.

Our nations  are living securely, comfortably and complacently, but in rebellion against God's statutes.   The West and its churches appear not to be concerned by warnings that the tribulation is very close.   The Tribulation is just as much a part of scriptural prophecy as the nice things.

There are many eminent teachers and preachers who hold differing views on whether the Rapture will occur before the seven year Tribulation, half way through it or at the end of it.  If you put  "Rapture" and "tribulation" into search engines you will see the arguments put forth.

The Tribulation described in Daniel and Revelation is an "end times" event which occurs in a period of seven years, but the Church, in many parts of the world, is undergoing a  time of tribulation right now.   As the Angel explains to John in the Revelation, "These are they who have come out of the great tribulation"  having been martyred for their faith.

While I was speaking and praying, confessing my sin and the sin of my people Israel and making my request to the LORD my God for his holy hill-- while I was still in prayer, Gabriel, the man I had seen in the earlier vision, came to me in swift flight about the time of the evening sacrifice. He instructed me and said to me, "Daniel, I have now come to give you insight and understanding. As soon as you began to pray, an answer was given, which I have come to tell you, for you are highly esteemed. Therefore, consider the message and understand the vision:  "Seventy `sevens' are decreed for your people and your holy city to finish  transgression, to put an end to sin, to atone for wickedness, to bring in everlasting righteousness, to seal up vision and prophecy and to anoint the most holy.  "Know and understand this: From the issuing of the decree  to restore and rebuild Jerusalem until the Anointed One,    the ruler, comes, there will be seven `sevens,' and sixty-two `sevens.' It will be rebuilt with streets and a trench, but in times of trouble. After the sixty-two `sevens,' the Anointed One will be cut off and will have nothing.  The people of the ruler who will come will destroy the city and the sanctuary. The end will come like a flood: War will continue until the end, and desolations (Greek shamem) have been decreed. He will confirm a covenant with many for one `seven.' In the middle of the `seven'  he will put an end to sacrifice and offering. And on a wing of the temple he will set up an abomination that causes desolation, until the end that is decreed is poured out on him.

Now, brothers, about times and dates we do not need to write to you, for you know very well that the day of the Lord will come like a thief in the night. While people are saying, "Peace and safety," destruction (Greek elethros) will come on them suddenly, as labor pains on a pregnant woman, and they will not escape.   But you, brothers, are not in darkness so that this day should surprise you like a thief. You are all sons of the light and sons of the day. We do not belong to the night or to the darkness. So then, let us not be like others, who are asleep, but let us be alert and self-controlled. For those who sleep, sleep at night, and those who get drunk, get drunk at night. But since we belong to the day, let us be self-controlled, putting on faith and love as a breastplate, and the hope of salvation as a helmet. For God did not appoint us to suffer wrath but to receive salvation through our Lord Jesus Christ. He died for us so that, whether we are awake or asleep, we may live together with him. Therefore encourage one another and build each other up, just as in fact you are doing.

Rev 7:14 (KJV) And I said unto him, Sir, thou knowest. And he said to me, These are they which came out of great tribulation, and have washed their robes, and made them white in the blood of the Lamb.

Rev 7:14 (CJB) "Sir," I answered, "you know." Then he told me, "These are the people who have come out of the Great Persecution. They have washed their robes and made them white with the blood of the Lamb.

Note KJV "out of great tribulation" literally from the Greek "ex megas thlipsis." and CJB less literally "out of the Great Persecution"

Weighing these interpretations suggests that Revelation 7:14 is referring to the persecution of the saints through all times rather than just at one particular time called "the Tribulation". Not to the tribulation of the whole world. (The seven woes to the world occur after this)

(It would be insensitive to suggest, sitting comfortably in UK, that the tribulation for Christians is somewhere in the future, while Christians under the boot of Islamic State, Boko Haram and other Islamist terrorists are suffering and dying for their faith)

The "pre tribulation rapture" view holds that the believers will all suddenly be taken away ("two will be grinding; one will be taken and the other left"  and other words of Jesus).   The seven year tribulation will start after that.   Certainly, the world would be a much worse place than it is, but for the prayers of the faithful.   The removal of  Jesus' faithful believers would certainly set off a time of tribulation for the world.

Others believe the rapture will occur midway or "post tribulation".   Either way, believers will be in there suffering, although strengthened by the Lord.   One argument for mid or post tribulation views is that God put considerable effort into preparing His people for the tribulation - presumably because they are going to be around to experience it?

Pre, Mid or Post Tribulation is not the big issue; and it does not appear that God intended satisfy our intellectual curiosity in this matter. But surely He wants us to take its implications seriously.

Are you ready for tribulation?

Are you thoroughly grounded in the word of God so that your faith will not be shaken?

Is there serious evangelizing still to be done first?

Do we have a sense of urgency?

If "The Tribulation" is a specific event at a specific time,  Persecution is an ongoing truth for Jesus' church.  See also Persecution for some thoughts and some encouraging scriptural guidelines.

See also Post Modernism,  Humanism with Europe,   Sexuality and Islam for some sources of persecution for Christians